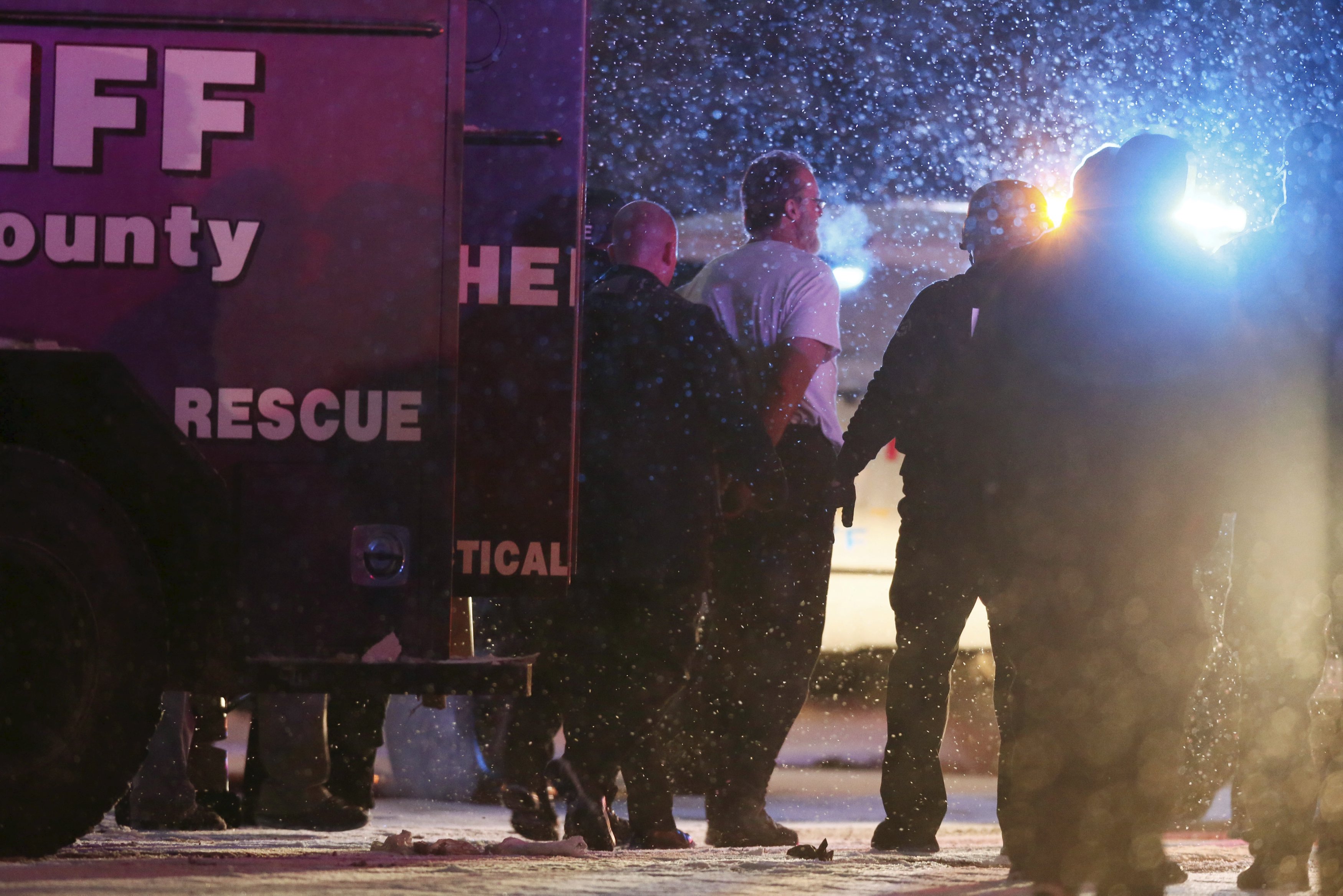 Police Lt. Catherine Buckley said two civilians and one police officer were killed. The officer was from the University of Colorado Colorado Springs police department, which was among the local law enforcement agencies that responded.

He was a six-year veteran of the department, which Shockley-Zalabak said is comprised of "sworn, state-certified police officers."

"UCCS is working with Officer Swasey's family and continues to support the Colorado Springs Police Department at the shooting scene," Shockley-Zalabak said.

Nine people who were wounded -- five police officers and four civilians -- were hospitalized in good condition, Buckley said. The extent of their injuries was not known, although CBS Denver reported that one officer was shot in the hand.

"It is too early to speculate on a motive," she said.

A source told CBS News justice correspondent Jeff Pegues the suspect was cooperating. Investigators were looking through his background and trying to determine if he had made threats against the facility in the past.

Authorities received a call of shots being fired at the clinic shortly before noon. Buckley said that the initial information police received was that the shooter was armed with a "long gun."

Pegues reported that the suspected gunman fired shots upon entering the building, which was guarded by security.

Buckley said that officers continued to encounter gunfire inside the building as police evacuated people who had taken cover in closets and bathrooms.

Authorities were concerned explosives may also have been involved, Pegues reported.

Buckley said the suspect "brought several items with him" into the Planned Parenthood building, which needed to be checked. She would not elaborate.

The building's bulletproof windows proved to be a challenge for police as they tried to bring the incident to a close, Pegues reported.

"Our hearts go out to the families and loved ones of the brave law enforcement officers who put themselves in harm's way in Colorado Springs," Cecile Richards, President and CEO of Planned Parenthood Federation of America, said in a statement. "We are profoundly grateful for their heroism in helping to protect all women, men and young people as they access basic health care in this country."

In a statement, Planned Parenthood of the Rocky Mountains said the organization didn't know whether its clinic was the target of the attack.

"We share the concerns of many Americans that extremists are creating a poisonous environment that feeds domestic terrorism in this country," the statement said. "We will never back away from providing care in a safe, supportive environment that millions of people rely on and trust."

Investigators were working off the theory that the suspect specifically targeted Planned Parenthood as some form of violent protest against the organization, sources told Pegues.

As CBS News first reported in September, an FBI intelligence bulletin went out to law enforcement agencies nationwide with that warning. It came as Congress was debating Planned Parenthood funding, and on the heels of the release of a series of videos by the Center for Medical Progress that purported to show Planned Parenthood doctors discussing the harvesting of fetal tissue from abortions.

The September intelligence bulletin warned of "lone offenders using tactics of arsons and threats all of which are typical of the pro-life extremist movement."

At that time, there had already been nine criminal or suspicious incidents in seven states and the District of Columbia. In one incident, someone poured gasoline on a New Orleans Planned Parenthood security guard's car and set the vehicle on fire.

According to the FBI, there was another incident in July in Aurora, Colorado, in which someone poured gasoline around the entrance of a Planned Parenthood facility there, causing a fire.

President Obama was briefed on the shooting by his homeland security adviser, Lisa Monaco, and would be updated on the situation as necessary.

Joan Motolinia said his sister, Jennifer, was trapped inside the clinic and hiding behind a table from someone shooting inside the building when she called him.

"She was telling me to take care of her babies because she could get killed," Motolinia said of the mother of three.

He rushed to the clinic but was frustrated because a police barricade kept him from getting close.

"People were shooting for sure. I heard someone shooting. There was a lot of gunfire. She was calm she was trying to hide from those people," he said.

Police cordoned off the clinic, nearby medical offices and a shopping center and told people to shelter in place.

Denise Speller, manager of a hair salon near the clinic, said she heard as many as 20 gunshots in the span of less than five minutes.

She told The Gazette newspaper that she saw a police cruiser and two officers near a Chase Bank branch, not far from the Planned Parenthood facility.

One of the officers appeared to fall to the ground and the other office knelt down to help and then tried to get the officer to safety behind the car, she said. Another officer told Speller to seek shelter inside the building.

Ambulances and police vehicles were lined up at the nearby intersection and police told people via Twitter to stay away from the shooting scene because it was not secure.

Mike Pelosi, who works at a deli at a nearby King Sooper grocery store, said he heard over the store's loudspeaker just before noon that nobody could leave the store.

Pelosi said customers and store employees were confused about what was going on but not panicked. He said a couple dozen customers were standing near the store entrance waiting for instructions.

The Planned Parenthood clinic is located next to a medical office building and near a shopping complex that included the King Sooper and other stores and restaurants.