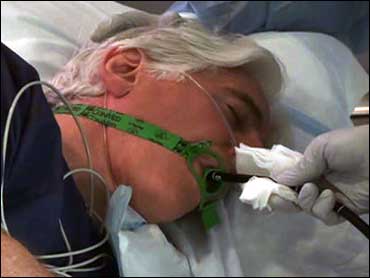 If you're from a Western country, there's a 10-20 percent chance that you suffer from classic symptoms of acid reflux: chronic heartburn and/or acid regurgitation.

But if you don't have those classic symptoms you may still have acid bubbling up from the stomach into the esophagus, a condition called "gastro-esophageal reflux disease" (GERD). Over the past decade, research has suggested that acid reflux can cause atypical symptoms such as cough, hoarseness, sore throat, asthma, and even chronic sinusitis. GERD can also cause chest pain, especially if the acid causes the muscle in the esophagus to go into spasm.

As an internist and gastroenterologist, I've seen patients who have suffered for years with atypical symptoms of GERD get better with treatment. Although I usually prescribe acid-reducing medication, I try to avoid an approach that relies exclusively on "better living through chemistry." In fact, my goal is to treat the symptoms with life-style adjustments alone if possible. Smoking and obesity both increase acid reflux and must be addressed. I tell my patients to limit alcohol, caffeine, chocolate, peppermint, and fatty foods (I know, basically anything that gives them even an iota of pleasure in life). I also suggest keeping a food diary to try to identify culprits such as tomato-based products or certain spicy foods. If their symptoms resolve then they can try to reintroduce the things they miss the most. Elevating the head of the bed can sometimes help.

The most serious consequence of chronic acid reflux is

It's estimated that almost 15,000 Americans will die from esophageal cancer this year. Fifty years ago, more than 95% of esophageal cancers were "squamous cell" - the kind caused by smoking and excess alcohol use. As smoking has declined, the incidence of squamous cell carcinoma has dropped. But for reasons that are not clear, esophageal adenocarcinoma - the kind linked to acid reflux (and smoking) - has dramatically increased over the past forty years and now accounts for about half the cases of esophageal cancer. From 1975 to 2001 there was a 600 percent rise in esophageal adenocarcinoma. The obesity epidemic may well be playing a role by increasing the number of adults with acid reflux.

Gastroenterologists can diagnose acid reflux by slipping a thin, flexible instrument (endoscope) through the mouth and down the esophagus. It's a lot easier than it sounds. Patients are usually given sedation and the back of the throat is sprayed with numbing medicine to avoid gagging. There's no problem breathing because the tube doesn't go into the breathing tube (the trachea). Biopsies can be taken from the last part of the esophagus to look for microscopic evidence of Barrett's and inflammation (esophagitis) caused by acid reflux.

There is currently a controversy about who should be endoscopically screened to look for evidence of Barrett's esophagus. Only a fraction of the millions of patients with chronic reflux will ever develop Barrett's. And many patients with Barrett's have no symptoms at all. In a study in Sweden, 1.6% of the population had Barrett's but only about 40% had heartburn. And only about half of esophageal adenocarcinoma is estimated to be a result of reflux.

The American College of Gastroenterology recommends against screening the entire population but says it may be appropriate in certain populations at higher risk - such as Caucasian males over 50 with longstanding heartburn. That would be me. So for this week's episode of CBS Doc Dot Com, I underwent an upper endoscopy, explained and performed expertly by Dr. Mark B. Pochapin, director of The Jay Monahan Center for Gastrointestinal Health at New York-Presbyterian Hospital/Weill Cornell Medical Center. For more information about the Jay Monahan Center, click here.

For information about GERD from the American Society for Gastrointestinal Endoscopy, click here: