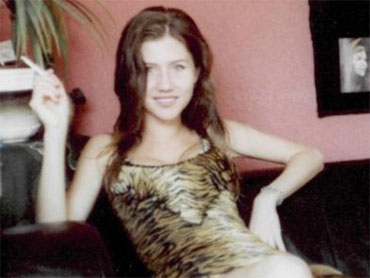 Those are the words prosecutors used to describe Anna Chapman, a red-headed 28-year-old accused of spying for Russia.

Chapman, a divorcee who appeared in a white T-shirt and designer jeans, stood before magistrate judge Ronald Ellis in a Manhattan federal court Monday evening along with four others arrested on charges of conspiring to act as "unregistered agents of a foreign government."

Chapman's attorney, Robert M. Baum, asked the judge to dismiss the charge of conspiracy, saying his client committed no crime by communicating with a member of a foreign government and called the acts listed in the prosecution's complaint "innocuous."

Assistant U.S. Attorney Michael Farbiarz argued against dismissing the claims, telling the judge that Chapman was an "extraordinary agent for Russia" who had communicated via "ad hoc" wireless networks in order to communicate and conspire with a Russian government agent.

"She is in the control of a foreign government agent," said Farbiarz.

FBI: 10 Russian Spies Arrested in U.S.
Russian Spy Arrests and Burger Diplomacy
Who Did the Alleged Spies Work For?

The prosecutor claimed she used a "range extender" for her laptop that communicated to an address that matched a Russian government computer. He said she met in a public place at least 10 times in the vicinity of that computer and believed a secret transfer of information was exchanged wirelessly.

Among the evidence he is prepared to offer, Farbiarz said Chapman purchased a cell phone under a false name that she used to make calls to Russia and then threw away the contract and phone charger from a car, which agents later retrieved. Her attorney fought back, saying that while she likely did make phone calls to Russia, he implied that they were to family members.

Her attorney said Chapman operated an online real estate business. She was divorced from a husband who was a citizen of the United Kingdom and had no children.

Chapman was arrested in New York City at 7:38 p.m. on Sunday night after arriving at the urgency of an undercover FBI agent posing as a Russian contact.

Chapman was given a fraudulent passport that was intended to be handed over to an unnamed person, and she was told "this passport is for someone here like you but no in true name," implying an illegal undercover agent for Russia.

She was arrested while turning the fraudulent passport over to police, which the prosecution labeled as an attempt for her to make herself appear innocent. Her defense attorney argued that if she was a "brilliant spy" as the prosecution alleged, then she would not have gone to the police to turn in the passport. "They can't have it both ways," Baum told the judge.

The prosecution cited other details of her involvement to demonstrate she might be more involved with Russia that merely communicating with a member of the Russian government. Farbiarz said in one instance she was to "leave a stamp on a map that said everything went OK."

He said that during Chapman's conversations with the FBI agent posing as a Russian contact, they discussed a tactic of avoiding surveillance by authorities by "walking around for three hours" to avoid being "tailed."

Baum argued against her detainment and asked for $250,000 bond and electronic surveillance for his client, which the judge denied.

The prosecution called all of the defendants "flight risks" despite their passports being turned over to the authorities.

Farbiarz said the five defendants were "people (who) are trained together" and said there were extensive surveillance recordings that document their conspiring with unregistered foreign entities.

Chapman will appear in court on July 27. A detention hearing is set for July 1 for the four others who appeared Monday.