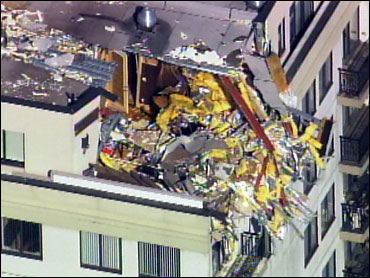 New York is in the midst of a construction boom. Tens of thousands of apartment and condo units are springing up all over Manhattan. Everywhere you look it seems, sits a sparkling new tower. A quick Goodling of the boom found that more than three dozen people had died in construction accidents in 2006 alone.

How many more cranes have to fall for before an immediate freeze is called on every building site in the city.

Neighbors around Ninety First and First had called the city to complain about the visibly shaky crane that fell today. Apparently that's not enough.

It's not just cranes collapsing either, recently a steel girder dropped from a crane and landed on a baseball field near the world trade center site. And a few weeks before that, a trash container dropped from the sky in times square. The crane collapse in March killed seven people.

Accident…? Or work condition so dangerous they were accidents waiting to happen.
By Harry Smith