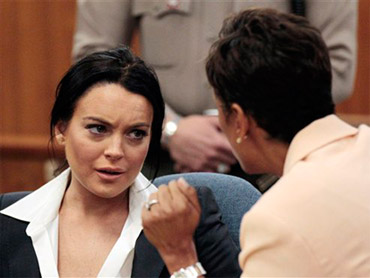 Michael Lohan asserts that abuse of prescription drugs is "eating her up" and she needs to go to rehab. He also insists he isn't interested in his daughter's money.

In Los Angeles Monday, a judge ordered the 23-year-old to wear an alcohol-monitoring bracelet and undergo random, weekly drug and alcohol testing in the L.A, area. Lohan is forbidden from drinking.

"If she doesn't comply," says CBS News legal analyst Trent Copeland, "the court's gonna throw her in jail for somewhere in excess of 180 days to upwards of one year."

She missed a hearing last week about possible probation violations, claiming she was trapped at the Cannes Film Festival after her passport was stolen. She denies charges she was partying, claiming her trip was all business.

On "The Early Show" Tuesday, Michael Lohan said the judge's orders were "a step in the right direction," but Lindsay needs to get carefully crafted rehab to keep her from becoming another young star to die from drug or alcohol abuse.

"I think (prescription drug abuse is) eating her up on an emotional level and a physical level, and I don't think she'll ever be herself unless she's off prescription drugs, or she'll never be at the place she should be in life, where she was before," Lohan told co-anchor Maggie Rodriguez. "She needs a rehab. She doesn't need jail."

Lindsay, he insisted, needs a rehab where drugs aren't snuck in.

He also ridiculed allegations he was behind any theft of Lindsay's passport in Cannes, and was adamant in saying he's not after Lindsay's money.

Rodriguez noted that repeated attempts by CBS News for reaction from Lindsay's side were unsuccessful.

To see the Michael Lohan interview, click on the video below: