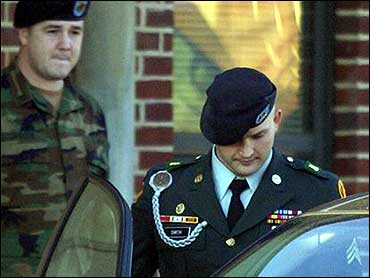 An Army dog handler was sentenced Wednesday to six months behind bars for using his snarling canine to torment prisoners at Abu Ghraib.

The military jury handed down the sentence a day after convicting Sgt. Michael J. Smith, 24. He could have gotten 8 ½ years in prison.

Smith was sentenced on five charges, including maltreatment of prisoners, conspiring with another dog handler in a contest to try to frighten detainees into soiling themselves, and directing his dog to lick peanut butter off other soldiers' bodies.

Prosecutors said he let his unmuzzled black Belgian shepherd bark and lunge at cowering Iraqis for his own amusement. The defense argued that Smith believed he was following orders to soften up prisoners for interrogation.

Smith appeared unrepentant when he addressed the jury Tuesday, shortly after he was convicted.

"Soldiers are not supposed to be soft and cuddly," he said.

A jury found Sgt. Michael J. Smith guilty Tuesday of abusing detainees at Iraq's Abu Ghraib prison by terrifying them with a military dog, allegedly for his own amusement.

He had faced the stiffest potential sentence of any soldier charged so far in the Abu Ghraib scandal — up to 24 1/2 years in prison if convicted on all counts. The court planned an afternoon sentencing hearing.

The military jury deliberated for about 18 hours over three days before announcing its verdict.

The government contended that Smith, of the 523rd Military Police Detachment, Fort Riley, Kan., used his black Belgian shepherd to intimidate five prisoners for fun and competed with another canine handler trying to make detainees soil themselves.

The prison, which currently holds more than 4,500 detainees, came to symbolize American mishandling of some prisoners captured in Iraq, both during the U.S.-led invasion three years ago and in the fight to subdue the insurgency since then.

Take a look inside Abu Ghraib.

Widely publicized photographs of prisoner abuse by American military guards and interrogators at the led to intense global criticism of the U.S. war in Iraq.

Earlier this month, the American military said its new lockup near the Baghdad airport to house security prisoners now held at the notorious Abu Ghraib prison should be ready within three months, at which time it would close Abu Ghraib and turn it back over to the Iraqis.

In closing arguments, prosecutors urged the panel of four officers and three senior noncommissioned officers to send Smith to prison for at least three years, followed by a bad-conduct discharge. Maj. Matthew Miller, a prosecution lawyer, said such a sentence would send a message that such actions will not be tolerated.

"Every soldier must understand that individual acts of misconduct have strategic implications," Miller said. "This is a global war on terror. It is a global battle for the hearts and minds of people all over the world."

But the defense said Smith should serve no jail time and instead be returned to his family and his unit. Capt. Scott Rolle told the jury that while Smith made mistakes at Abu Ghraib, he also is "a hero" decorated for saving the lives of other U.S. soldiers during a mortar attack.

Smith, of Fort Lauderdale, Fla., was charged under the Uniform Code of Military Justice with five counts of maltreatment of detainees, four counts of assault, two counts of conspiracy to maltreat detainees, one count of dereliction of duty and one count of indecency.

Nine other soldiers have been convicted of abusing detainees at Abu Ghraib. Among them, former Cpl. Charles Graner Jr., received the stiffest sentence — 10 years in prison.