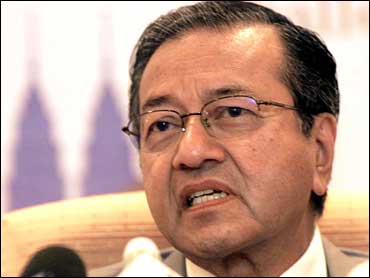 Former Prime Minister Mahathir Mohamad said disgraced U.S. lobbyist Jack Abramoff was paid $1.2 million to organize a meeting between him and President Bush in 2002, but denied the money came from the Malaysian government.

Mahathir told reporters late Monday he was aware the payment was made to Abramoff, but he didn't know who made it.

"I understood some people paid a sum of money to lobbyists in America but I do not know who these people were and it was not the Malaysian government," Mahathir said.

Mahathir said that at the time he had been persuaded by the Heritage Foundation in Washington to meet with Mr. Bush because the conservative think tank believed he could help "influence (Mr. Bush) in some way regarding U.S. policies."

In a report last week, The Los Angeles Times said that Abramoff received $1.2 million from the Malaysian government for his lobbying services in 2001 and 2002.

According to the Times, which cited an unnamed former Abramoff associate who attended meetings with the Malaysian ambassador and the lobbyist, Abramoff allegedly contacted presidential adviser Karl Rove at least four times to help arrange a meeting between Mahathir and Mr. Bush, which took place in May 2002 in the Oval Office.

Mahathir visited the White House at a time when Malaysia had emerged as a key U.S. ally in the war on terror, following Mahathir's crackdown on suspected Islamic militants. However, Mahathir had been consistently critical of Mr. Bush's foreign policies, and chastised by the West for his anti-Semitic comments and human rights record.

Abramoff, once among Washington's top lobbyists, pleaded guilty last month to charges that he and a former partner concocted a fake wire transfer to make it appear they were putting a sizable stake of their own money into a 2000 purchase of casinos.

Abramoff also has pleaded guilty to charges stemming from an investigation into his ties to members of Congress and to the Bush administration.

According to documents released by U.S. Senate investigators, the Malaysian government had paid $300,000 to a company connected to Abramoff as part of a broad lobbying strategy that included arranging two confessional trips to Malaysia in January 2002 and a trip by then-House Majority Leader Tom DeLay and his wife in October 2001.