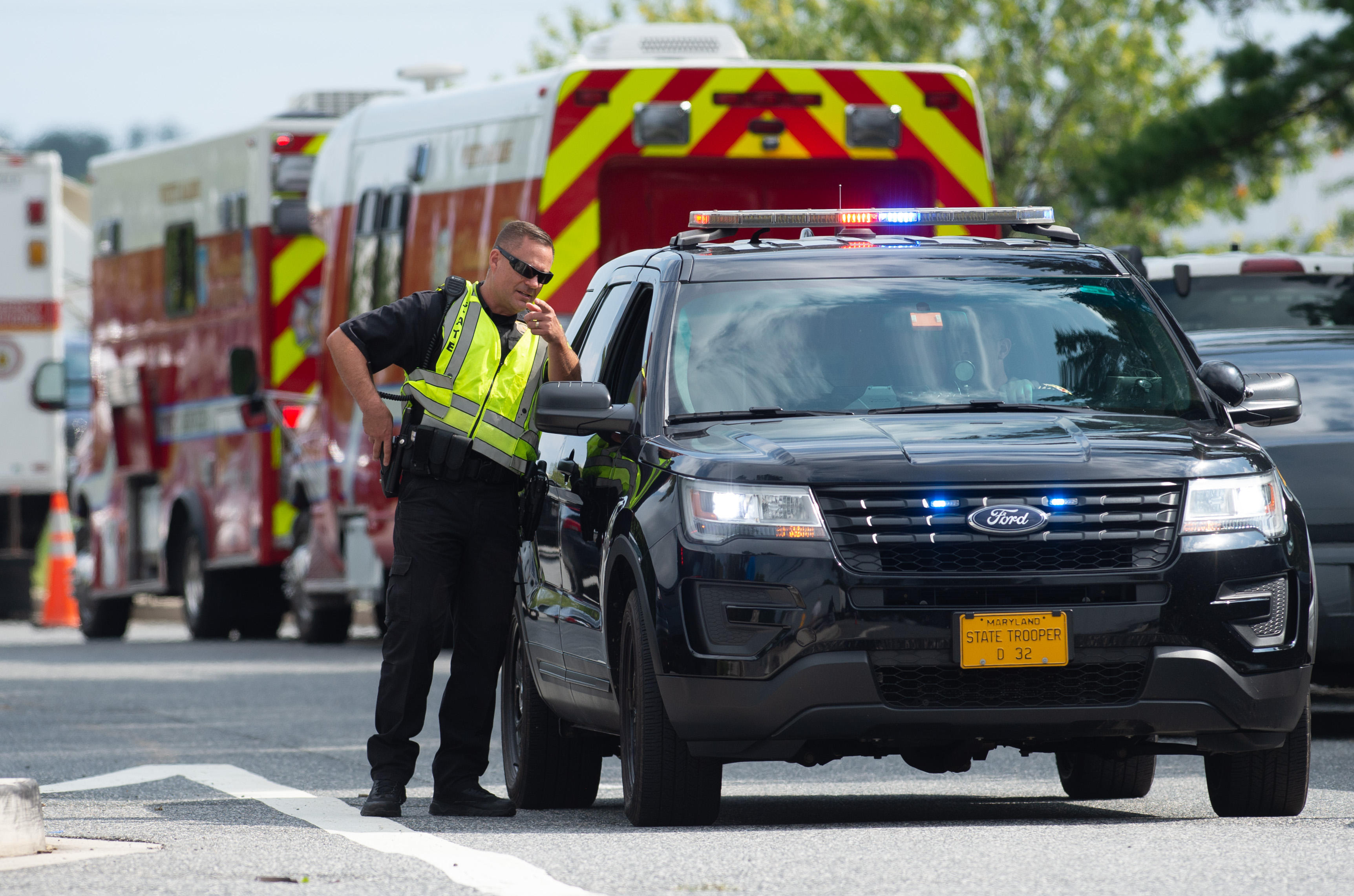 ABERDEEN, Md. — A woman working a temporary job at a drugstore warehouse in Maryland got into an argument at work Thursday morning and began shooting colleagues, killing three before fatally turning the gun on herself, authorities and witnesses said. The incident took place at the Rite Aid distribution facility in Harford County, Maryland.

Workers at the facility described terrifying moments of "crazy" gunfire and people screaming and running in all directions after the shooting. Others said they helped the wounded, one person tying blood-soaked jeans around a man's injured leg in a bid to stop the bleeding.

The suspect was identified as a temporary employee at the distribution center, according to Harford County Sheriff Jeffrey R. Gahler. The sheriff's office identified her in a tweet as Snochia Moseley, 26, from Baltimore County.

"She had reported for her workday as usual, and around 9 a.m. the shooting began, striking victims both outside the business and inside the facility," Gahler said. "We do not at this time have a motive for this senseless crime."

It appears only one weapon, a handgun, was used, and no shots were fired by responding law enforcement officers, Gahler said. The shooter used a 9 mm Glock that was registered in her name, he said. She died at a hospital from a self-inflicted gunshot wound, he said.

Krystal Watson, 33, said her husband, Eric, works at the facility and told her that the suspect had been arguing with somebody else near a time clock after a "town hall meeting."

"She didn't have a particular target. She was just shooting," Watson said as she drove away from a fire station where relatives tried to reunite with loved ones.

Colleen Hendrickson lives and works nearby, and she thought it was a normal day while heading to catch the bus and head to work, but then someone warned her there was an active shooting nearby.

"It's mostly warehouses in the area," she said. "It's usually just a really sleepy place."

Thursday's rampage happened almost three months after a man opened fire inside a newspaper office in Annapolis, Maryland. Five staff members were killed in that shooting. Authorities accused Jarrod W. Ramos of attacking The Capital Gazette because of a longstanding grudge against the paper.

In a tweet, Maryland Gov. Larry Hogan said his office was monitoring the situation in Aberdeen and the state stands ready to offer any support. He called it a "horrific shooting."

Susan Henderson, a spokeswoman for Rite Aid, said the shooting unfolded on the campus of a company distribution center in Aberdeen. She described it as a support facility adjacent to a larger building.

Harford County Executive Barry Glassman said that unfortunately, incidents like this are "becoming a too-often occurrence not only in Harford County but in the country."

Walter Zambrano, 64, who described himself as a worker at the distribution center, said he was in the bathroom when the shooting broke out and saw nothing as he hid, frightened for his life.

The person was "shooting like crazy," Zambrano said, speaking in Spanish.

He said the gunfire seemed to go on for several minutes, and when it was over he sprinted outdoors. On the way out, he said he saw a female co-worker down on the floor. The scene, he said, was one of chaos.

"Everyone was screaming, running this way and that. I didn't know which way to run," he said.

Mike Carre, an employee of a furniture logistics operation next to the distribution center, said he helped tend to a wounded man who came hobbling in, bleeding from his leg. He called 911 from a bathroom before helping colleagues wrap the man's blood-soaked jeans above his injury to cut off blood flow.

Carre said the man told him the shooter "just came in in a bad mood this morning. He said she's usually nice. But today, I guess it wasn't her day. She just came in to pick a fight with someone."

"She pulled out a gun and she just started shooting at her co-workers."

Dominique Norton, 33, of Aberdeen, endured an excruciating wait of nearly two hours to be reunited with her mother, 62-year-old warehouse worker Irene Norton. Dominique Norton said she didn't know that her mother was unharmed until she got off a bus at the fire station and they tearfully embraced.

"I busted out crying. I was relieved and shaken," she said. "I am praying for all of the victims."