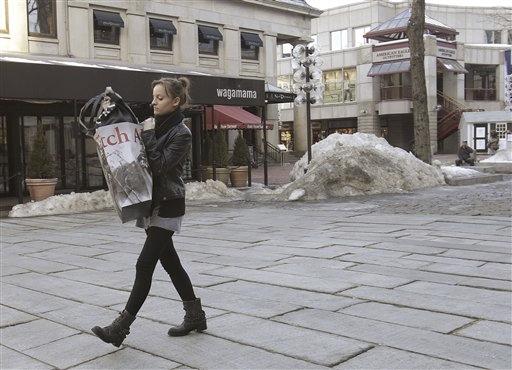 The preppy teen clothing company, which has expanded internationally to offset slower U.S. growth, also said it will be increasing prices to deal with rising costs, a situation many retailers and consumer product companies are finding themselves in these days.

Domestic revenue rose 13 percent in the quarter. These results were helped by aggressive promotions and an appealing product assortment, CEO and Chairman Mike Jeffries said during the company's conference call.

U.S. shoppers have been slow to return to their old shopping habits, instead hanging on to the bargain hunting skills used during the recession. This has made it harder for retailers, pushing some to ramp up promotions while trying to keep a lid on costs and inventory levels.

But Chief Financial Officer Jonathan Ramsden said Abercrombie is hoping to have fewer promotions that are not as deep going forward.

The story has been better abroad, where Abercrombie enjoyed a 61 percent surge in revenue. Jeffries said European results have been extremely strong, with Hollister Co. finding success in countries such as Germany, Spain and the U.K.

Revenue at stores open at least a year, a key retail measure, rose 13 percent in the fourth quarter. This figure is important to retailers because it excludes results from stores opened or closed in the past year.

While its revenue results are encouraging, Abercrombie said it is facing continued pressured from rising sourcing costs. Jeffries said the company expects to boost its prices because it is probably dealing with double-digit cost increases for the fall 2011 season.

Annual revenue increased 18 percent to $3.47 billion from $2.93 billion, while revenue at stores open at least a year rose 7 percent.

The retailer continues to push forward with its overseas expansion, with plans to open Abercrombie & Fitch flagship stores in Paris; Madrid; Dusseldorf, Germany; Brussels; Dublin; and Singapore in fiscal 2011. It also expects to open 30 to 40 Hollister stores in overseas malls.

The company anticipates a "minimal number" of stores opening in the U.S., with about 50 domestic locations likely to close during the fiscal year.

On Tuesday Abercrombie declared a quarterly dividend of 17.5 cents. The dividend will be paid on March 15 to shareholders of record on Feb. 25.