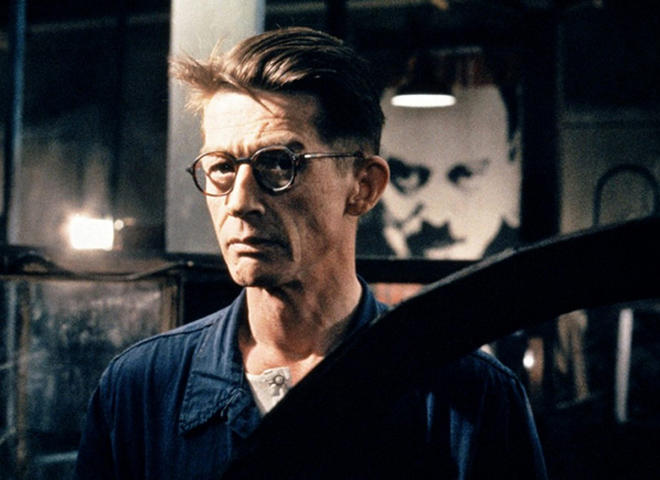 Nearly 200 movie theaters in the U.S. are screening the film adaptation of George Orwell’s classic dystopian novel “1984” on Tuesday in protest of President Trump’s government, and in particular of his recently proposed budget, which would cut funding to the National Endowment for the Arts, among several other government agencies and public services.

According to the United State of Cinema website, the participating theaters, “strongly believe in supporting the National Endowment for the Arts and see any attempt to scuttle that program as an attack on free speech and creative expression through entertainment.”

More than 180 cities and 10 international locations are participating in this day of artistic activism, the timing of which alludes to a moment in the book. “1984” protagonist Winston Smith, played by the recently deceased John Hurt, writes his first journal entry on April 4 as an act of protest against the totalitarian “Big Brother.”

In the novel, Smith’s job in the Ministry of Truth is to literally rewrite history, so that all of the government’s actions are shown in a positive light.

The screenings are meant to encourage viewers “to take a stand for our most basic values: freedom of speech, respect for our fellow human beings, and the simple truth that there are no such things as ‘alternative facts,’” according to the website. This comment referred to Kellyanne Conway’s use of the term “alternative facts,” which is evocative of some of the vocabulary coined by the novel, like “doublethink.” Doublethink in “1984” is the ability to accept two mutually exclusive, contradictory thoughts and believe both of them to be true.

“1984” saw a recent resurgence in popularity, making it to the top of Amazon’s bestseller list in January, around the time of Trump’s inauguration.

A portion of the proceeds from ticket sales Tuesday will go to local charities and organizations.