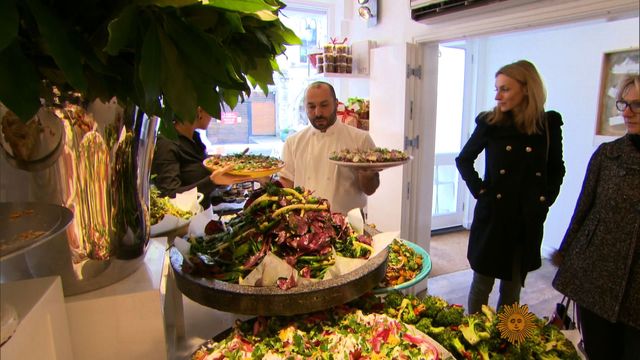 (CBS News) There's no question that food brings people together, especially this time of the year. But it took a pair of remarkable chefs to find just the recipe for bringing two seemingly incompatible cultures together. Elizabeth Palmer found them hard at work in London:

Hungry Londoners have been celebrating mealtimes at any one of three Ottolenghi delis since 2002.

Now there's a restaurant, too, which serves up mouth-watering food rooted in the flavors of the Middle East.

"There is a real yearning for our set of flavors," said Yotam Ottolenghi.  "And we brought in Middle Eastern flavors where people were not so familiar with them."

Sami Tamimi said they aim for the colorful: "We always say a sunny food.  Lots of textures, lots of flavors.  The colors are very, very important as well."

"And the informality, I'd say," Yotam added. "Our whole kind of ethos, both in the restaurants and the books, is that there's something to celebrate."

The men behind this mini-empire are Tamimi, an Israeli Palestininan, and Ottolenghi, an Israeli Jew. They met while working in a London deli after immigrating to the U.K. in the late 1990s. "We have been a presence here for quite a while," said Ottolenghi. "So in England we were a kind of a known entity, but not in America."

Not, that is, until the publication of their sumptuous cookbook, "Jerusalem" -- and the story of their partnership under the sole name Ottolenghi (because it sounded good) propelled them to celebrity chefdom in the United States as well.

"Does it bother you," Palmer asked Tamimi, "to be under your partner's last name?"

"I think it did, but not anymore.  I might have to think about this question now!" he laughed.

Their shared heritage in Jerusalem inspired their latest book's exploration across cultural and religious lines . . . the sun-baked streets and alleys of the Old City, transformed into recipes for the modern cook, in the Ottolenghi test kitchen under a set of London railway arches.

Example:  a Middle Eastern salad. "The blueprint is the typical chopped salad," said Ottolenghi, "but we add all these spiced chick peas in the middle.  So you've got a contrast of warm and cold."

"Does being a Palestinian and a Jew working together affect your relationship?" asked Palmer.

"I don't think it affects our relationship really; I never thought that it did," replied Ottolenghi. "Because first and foremost we were just two people that got on really well together, became friends.  You know, it's just a friendship that evolved.  And I don't think the fact that we're a Jew and a Palestinian ever affected that."

"Yeah, but on the other hand, if we'd been living back home, there wouldn't be any of that," said Tamimi.

"I think we would've been -- might have been friends," said Ottolenghi, "but I think that we probably wouldn't have had a business."

It was cosmopolitan London -- chock-full of immigrants and glorious food -- that nurtured this success story.

For the moment there are no plans to enter either the American market . . . or politics.

"They go like, 'Are you guys the poster boys of peace in the Middle East?'" said Ottolenghi.  "And we have to say, 'Well, look, we are what we are. But if people want to be inspired by what we are doing, by all means, you know?' That's the kind of answer I normally give."

And, he adds, if real Middle East peace talks ever do get under way, he and Sami will be delighted to handle the catering.