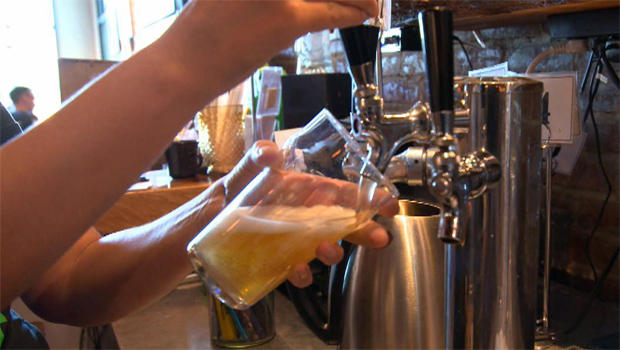 Portland, Oregon has become known as the hipster center of the U.S.A., thanks to all the bike riders and backyard chicken coops, food trucks and artisanal coffee. But as our correspondent Luke Burbank discovered, there’s something new brewing in Portland: call it “ale-truism”:

At first glance, the Oregon Public House looks like any other hipster pub in Portland. There are lovingly-crafted local beers … someone’s playing a ukulele. The only thing missing are the free-range chickens.

But take a closer look, and you’ll notice something unusual: a sign reading “nonprofit pub.”

“This is the most Portland thing I’ve ever heard,” laughed Burbank.

“Yeah, I know, right?” said Ryan Saari. “And it really feels a little like that. Like, ‘Oh, a nonprofit pub, oh, jeez. Oh, Portland, what are you gonna do next?’”

Yes, the Oregon Public House calls itself America’s first nonprofit pub. The idea came to founder Ryan Saari exactly how you’d think it would:  “I was having a beer, I was drinking, sitting in the backyard with my buddy and I thought, ‘What about a pub?’  ‘Cause there’s nothing more Portland than nonprofits and breweries.”

He’s not kidding: Portland is home to more than 60 breweries, and nearly 7,000 non profits.

“And so the two coming together was just, like, totally harmonious,” Saari said.

Now to be clear, the Public House does make a profit. It just gives all those profits away.

“And so we are able to track where the money goes for each charity. And then at the end of the month, whatever we make, we donate it in the way of our customers’ choosing.”

Here’s how it works: Every six months, a new batch of charities goes on the menu. Over the last three years, the pub has donated more than $100,000 to dozens of good causes, from PTAs to urban farms, from homeless teens to cancer survivors.

Burbank asked, “Do you notice that certain charities kind of -- for lack of a better word -- perform better than others?”

“I mean, I’m looking up there, and I notice for instance, one has a dog on it. That’s probably doing okay, right?”

“My advice would be no matter what your charity is actually about, put a dog on there.”

Even Saari has to admit the whole thing feels a little like something from the TV show “Portlandia.”  But it can mean serious money for charities.

One of the current “charities on tap” is the Wayfinding Academy, a brand-new college.

“Starting a college from scratch is not a thing people do,” said Michelle Jones, who is drumming up donations for the school, table by table, pint by pint, without the advantage of a furry logo.

“Which is kind of appropriate because running a not-for-profit pub is also not a thing people do,” Burbank said.

“Right, which is why we’re good friends and perfect partners! When you’re one of the ‘charities on tap,’ for a month you pick a night of the week. And so a team of us, usually two or three or four of us, come and serve from 4:00 to 8:00. And tonight I’ll be one of those servers.”

And on this day, the personal touch seemed to be working. “I think it’s pretty cool,” said one customer, Margaret. “I mean. we walked in, they greeted us right away, told us all about it, ushered us to the bar to order something and pick our charity!”

“I think it’s comfortable, it’s a nice atmosphere, and I think it’s an awesome idea,” said another customer, Lisa.

So, which charity did Margaret pick? “We picked the … Wayfair?”

And all those pints really add up…

“In the end,” said Jones, “the contribution we’ll get from the Oregon Public House will be essentially equivalent of one of our major donors for the year. It all depends a little bit --”

“On how much beer I drink tonight?” Burbank asked.

“On how much beer everybody drinks!”

“I appreciate that, Luke. Thanks!”

Believe it or not, there’s actually another nonprofit venture in Portland, called the Ex Novo Brewing Company. Joel Gregory started the brewery back in 2014.

Ex Novo hasn’t given away as much money as the Oregon Public House -- yet. So far just about $10,000 or so. But because they’re selling cans and bottles all over the Pacific Northwest, and even exporting to Japan, Gregory believes they are set up to donate a half-million dollars by 2020. “That’s less than four years away.”

“You seem like a nice guy and it’s good to help the world,” Burbank said. “But is some part of you, like, thinking, ‘Man, I could really use an extra half million-dollars’?”

“I guess. I mean, I’ve just always been wired, like, I just need enough. I don’t really care that much about being overly-wealthy. So that’s kind of why this thing is a nonprofit.”

Ryan Saari, of Oregon Public House, thinks this “ale-truism” idea could take off nationally. “I get phone calls, emails every week, probably every day from people around the country that are interested in this model in their city,” he said. “And they always say the same thing: ‘This would work great in northeast Albuquerque.’ ‘This would be amazing in south Toledo.’ And I really think that they’re probably right.”

Meaning even more Americans soon may have the chance to warm some hearts just by having a cold one.