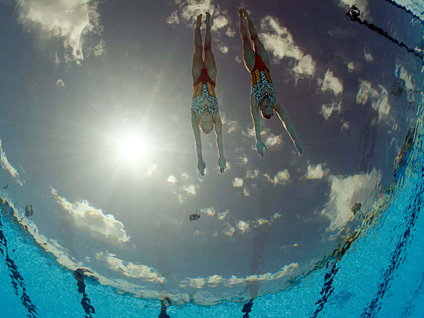 In "Spy Kids 3D: Game Over," young secret agents Juni and Carmen are joined by some new kids, including a karate expert named Arnold, who is played by Ryan Pinkston.

Some may recognize the 15-year-old actor from the hit MTV series "Punk'd," in which Pinkston has convincingly appeared in pranks playing a young child.

In "Spy Kids 3D," Pinkston isn't a "bad guy," but a child on a mission to save his family from poverty.

"The whole movie is based around a video game that we're all in," Pinkston explained on The Early Show. "At the end of the video game, if you win, you win money and riches and everything. My family is actually suffering from poverty … I have to do anything to win this game, even if it means I have to beat Juni."

Playing Arnold was Pinkston's first movie role, and he had an unbelievable time on the set.

"It was awesome," he said. "It was great working with everyone there — the director, Robert Rodriguez, and everyone, George Clooney. It was a great movie for my first movie to work on."

Making the movie allowed the young actor to be surrounded by celebrities, such as veteran actor Ricardo Montalban from the old television series "Fantasy Island."

"You think celebrities are all kind of not very nice," said Pinkston. "That's the stereotype we get. You go there and then you meet them. They're amazing."

More celebrities, however, may not be as nice to Pinkston after appearing on Ashton Kutcher's "Punk'd" TV show. The updated "Candid Camera" show for the MTV generation tries to embarrass and humiliate celebrities. Pinkston has succeeded in making some stars look foolish. On one show, Pinkston played an 8-year-old reporter on the red carpet at an award show. He continued to call actress Christina Applegate by the wrong name — addressing her as singer Christina Aguilera. And, on top of that, he tried to get a date with both stunned actress and singer.

"Obviously it's not a scripted event, so you don't know what they're going to throw at you," said Pinkston. "So, you have to actually improv a lot. That's what I do."

But some pranks can turn ugly and uncomfortable. In another episode of "Punk'd," Pauly Shore knew he was being videotaped, and decided to have a little fun.

After Shore discovered Pinkston worked for "Punk'd," he wanted a little revenge.

"He came out and said some pretty vulgar things to me," laughed Pinkston. "It was all worth it."