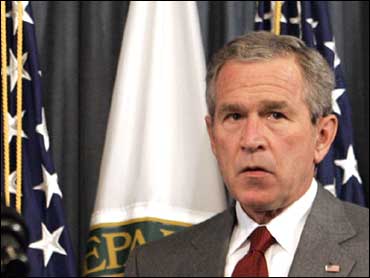 George W. Bush is the imperial president that James Madison and other founders of this great republic warned us about. He lied the nation into precisely the "foreign entanglements" that George Washington feared would destroy the experiment in representative government, and he has championed a spurious notion of security over individual liberty, thus eschewing the alarms of Thomas Jefferson as to the deprivation of the inalienable rights of free citizens. But most important, he has used the sledgehammer of war to obliterate the separation of powers that James Madison enshrined in the U.S. Constitution.

With the "war on terror," Bush has asserted the right of the president to wage war anywhere and for any length of time, at his whim, because the "terrorists" will always provide a convenient shadowy target. Just the "continual warfare" that Madison warned of in justifying the primary role of Congress in initiating and continuing to finance a war — the very issue now at stake in Bush's battle with Congress.

In his Political Observations, written years before he served as fourth president of the United States, Madison went on to underscore the dangers of an imperial presidency bloated by war fever. "In war," Madison wrote in 1795, at a time when the young republic still faced its share of dangerous enemies, "the discretionary power of the Executive is extended ... and all the means of seducing the minds are added to those of subduing the force, of the people."

How remarkably prescient of Madison to anticipate the specter of our current King George imperiously undermining Congress' attempts to end the Iraq war. When the prime author of the U.S. Constitution explained why that document grants Congress — not the president — the exclusive power to declare and fund wars, Madison wrote, "A delegation of such powers [to the president] would have struck, not only at the fabric of our Constitution, but at the foundation of all well organized and well checked governments."

That last sentence perfectly describes the threat of what President Dwight Eisenhower, 165 years later, would describe as the " military-industrial complex," a permanent war economy feeding off a permanent state of insecurity. The collapse of the Soviet Union deprived the military profiteers and their handsomely-rewarded cheerleaders in the government of a raison d'être for the massive war economy supposedly created in response to it. Fortunately for them, Bush found in the 9/11 attack an excuse to make war even more profitable and longer-lasting. The Iraq War, which the president's 9/11 Commission concluded never had anything to do with the terrorist assault, nonetheless has transferred many hundreds of billions in taxpayer dollars into the military economy. And when Congress seeks to exercise its power to control the budget, this president asserts that this will not govern his conduct of the war.

There never was a congressional declaration of war to cover the invasion of Iraq. Instead, President Bush acted under his claimed power as commander in chief, which the Supreme Court has held does allow him to respond to a "state of war" against the United States. That proviso was clearly a reference to surprise attacks or sudden emergencies.

The problem is that the "state of war" in question here was an al Qaeda attack on the U.S. that had nothing whatsoever to do with Saddam Hussein's Iraq. Perhaps to spare Congress the embarrassment of formally declaring war against a nation that had not attacked America, Bush settled for a loosely worded resolution supporting his use of military power if Iraq failed to comply with U.N. mandates. This was justified by the White House as a means of strengthening the United Nations in holding Iraq accountable for its WMD arsenal, but as most of the world looked on in dismay, Bush invaded Iraq after U.N. inspectors on the ground discovered that Iraq had no WMD.

Bush betrayed Congress, which in turn betrayed the American people — just as Madison feared when he wrote: "Of all the enemies to public liberty war is, perhaps, the most to be dreaded, because it compromises and develops the germ of every other."
By Robert Scheer
Reprinted with permission from The Nation