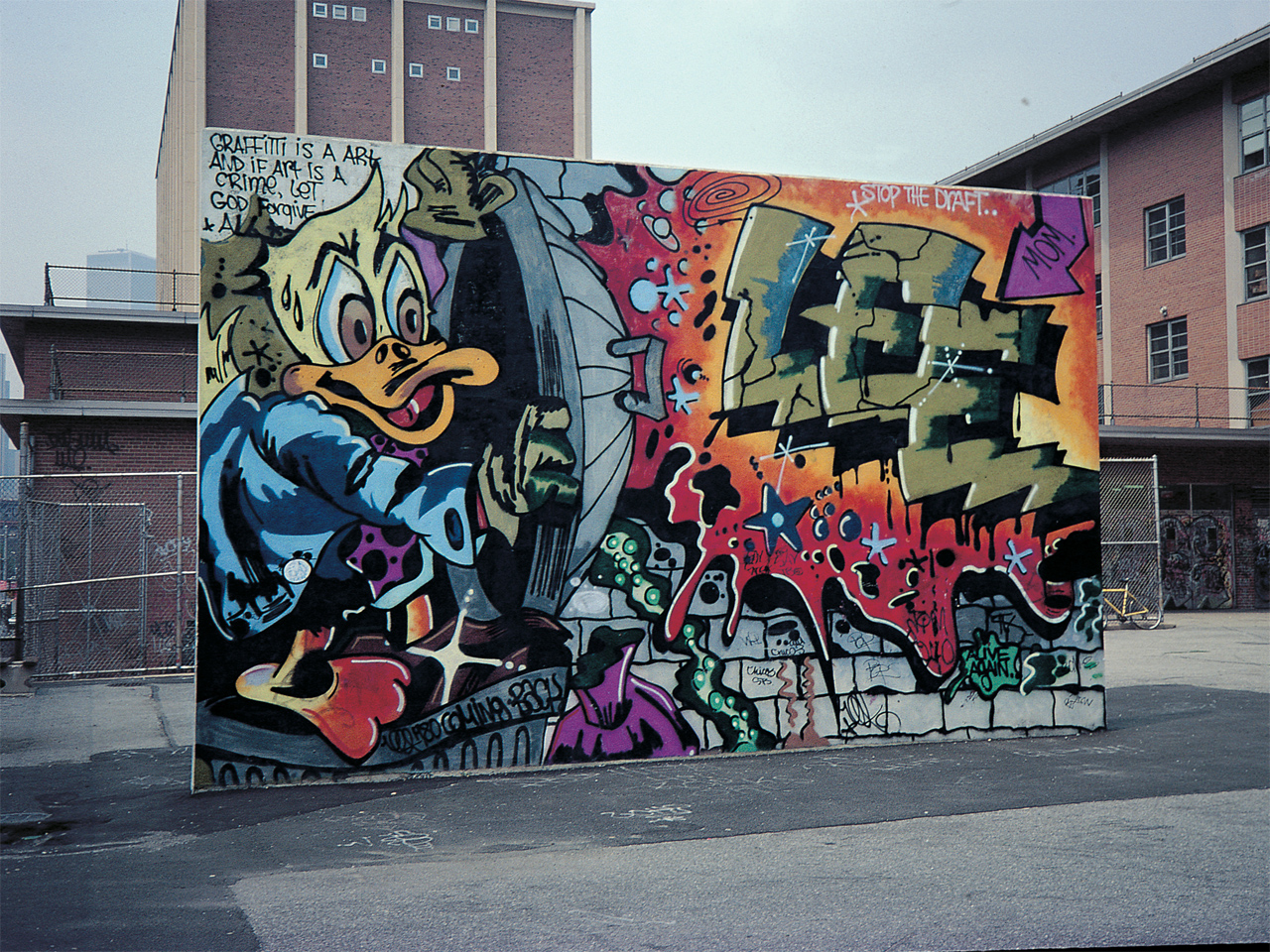 A painting called "Buff," by an artist who's known simply as "Lee," would sell for something like $90,000 -- quite a step up from his graffiti roots, when he was writing on the wall for free. Rita Braver now joins the issue over whether graffiti is art:

"It is now in fact a national urban epidemic," said one journalist in a 1972 CBS News report. "It spreads like some mysterious magic marker pen, spray-paint fungus. And now it seem that almost every inch of every public wall is covered with names in an obscured kind of print."

Remember when graffiti was the scourge of American cities?

But now what was once considered vandalism is being presented in an exhibit at the Museum of the City of New York, showcasing some who, as teenagers, left their mark in the 1970s and '80s.

McGurr, Chris Ellis (who goes by the street name of Daze), and Sandra Fabara (also known as Lady Pink), say that early graffiti was all about "tagging" -- figuring out a stylish and distinctive way to write your street name.

Ellis said, "Spray paint was the perfect medium for what we were doing, because it was vibrant colors, it was quick, it dried fast, and enabled you to paint on a large scale."

Over the years, graffiti writers began to embellish their works with more design elements, many "borrowed" from popular culture.

All along, part of the attraction for these kids (including Lady Pink) was that they were outlaws, with spray paint (often stolen) as their weapon of choice:

"Learning how to paint in pitch blackness with your knees banging together, your heart in your throat, you hear a noise and it might be only a rat, but you jump out of your sneakers and you run down the length of the lane -- and then you have to come back and continue painting in the dark," said Fabara. "You develop night vision. This is not an easy feat."

But what many of us never realized is how hard these teenagers worked on their creations. They actually planned out what they were going to put on buildings and trains and buses.

"Yeah, it was very common to kind of work on your style and then translate it into work in the world," said Sean Corcoran, who curated the exhibit.

Corcoran showed Braver a rare group of "Little Black Books," essentially sketchbooks. There are also photos and reproductions of graffiti, all collected by the late Martin Wong, a painter in his own right who became friend and mentor to many of the young graffiti writers.

"He believed there was a real creative value to what these kids were doing," said Corcoran, "and he really bought into who they were."

"He saw them as artists, not hoodlums?" said Braver.

But others object to glorifying graffiti, arguing that it's a sign of a city out of control.

Heather Mac Donald, who writes about urban policy for the Manhattan Institute, says she is angry about the exhibit, and describes the graffiti writers' work as "filthy" and "spirit-killing."

"It does not focus sufficiently on the corrosive effect that graffiti had on the city's spirit," she told Braver. "Anybody who could avoid the subways in the 1970s and '80s, did."

"The exhibit presents graffiti in the context of art -- you're suggesting that this isn't art," said Braver.

"It is vandalism," Mac Donald said. "It is an appropriation of the public's space or somebody's private property without permission. And nobody has a right to do that."

But there's another perspective:

"It's only graffiti or vandalism if you get arrested, but if you get away with it, then it's clearly art," said Lady Pink.

In fact, graffiti began to disappear on streets and subways as New York City became more vigilant about cracking down and cleaning up.

But it has left a lasting impression on our culture: Futura 2000 has become a graphic artist who has worked for Nike and Levi's. Lady Pink is a painter whose work has been exhibited in several museums, and so is Daze.

And the graffiti movement paved the way for world-renowned artists like Keith Haring, Banksy and Shepard Fairey (who created the famous Obama Hope poster), all of which delights this trio of graffiti pioneers.

"I think we're all pretty grateful right now to have had that experience, because a lot of people pine for it," said Futura 2000. "They [say], 'Oh wow, must have been so cool back then in New York.' And you know what? Yeah, it was. And you missed it!"

The museum says this has been one of the most popular exhibits in years, and whether you like the work or what it stands for, there's no getting away from the fact that all of this was created by the very young:

The trains, said Lady Pink, were done by 14-, 15- and 16-year-olds: "It is done by kids. When was the last time we've ever seen an important movement be contributed by teenagers in our American culture?"

Picking up pickleball
Thanks for reading CBS NEWS.
Create your free account or log in
for more features.
View CBS News In
CBS News App Open
Chrome Safari Continue
Be the first to know
Get browser notifications for breaking news, live events, and exclusive reporting.