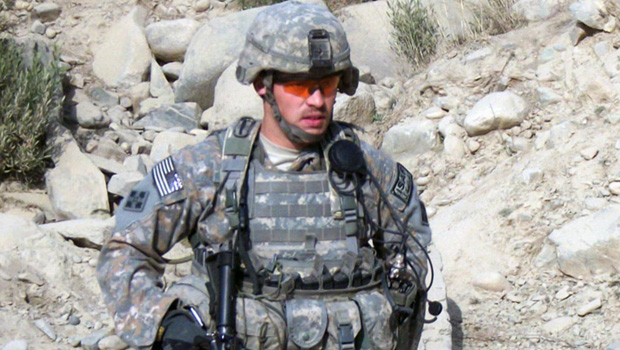 COMBAT OUTPOST KEATING was a remote U.S. Army position in Afghanistan that attracted a Taliban attack nearly seven years ago. The medal one of its defenders earned that day still weighs heavily on its recipient, as David Martin now tells us:

On his third combat tour Sgt. Clint Romesha, by his own description "a tiny cog nestled deep inside ... (the American) war machine," earned the Medal of Honor for his actions in Afghanistan. Now sporting a full beard, he tells audiences wearing the medal is a burden.

"These things aren't given out when something went right," he said. "A lot of stuff went wrong, and it's a heavy weight at some times."

Eight of his buddies were killed on the day in 2009 when he earned his medal defending an outpost in Afghanistan, which according to an Army investigation had "no tactical or strategic value." Now seven years later, he has written a book about "Red Platoon" (Dutton).

It is, he writes, "a saga whose characters ... are less heroic than one might wish ... exceptionally ordinary men who were put to an extraordinary test," in a place called Combat Outpost Keating in a remote Afghan valley.

In Romesha's words, "the most remote, precarious and tactically-screwed combat outpost in all of Afghanistan."

"You never take the low ground; you always take the high ground," Sgt. Romesha said. "'We're here doing this? This is insane!'"

When asked what Keating looked like from the point of view of the enemy, Romesha replied, "At times it looked like fish in a barrel."

As an Army sergeant, the only things Romesha could control were the training of his men and their attitude distilled in the motto "It doesn't get better." "That was the mentality: 'Yeah, this sucks, but we can't control it. We can't affect it.'"

Starting long before Romesha's platoon arrived, the Taliban routinely fired down on Keating from the heights.

"On average we'd get hit three to four times a week," Romesha said.

"What was the purpose of those attacks?"

"They were testing us to see what our battle plans were, how we would react, what our response times were."

There were 52 American soldiers at the camp and six main fighting positions.

"It wasn't uncommon to get shot at, at that time in the morning. It was kind of like a wake-up call most mornings," Romesha said.

But this morning was different, and it was all recorded on video by the Taliban.

The Taliban had opened up on the six main fighting positions, pinning them down so they could not return fire. Keating sent out its first call for help three minutes after the attack began: "Fire coming from everywhere ... We need something."

Soldiers not pinned down had to pull back from the perimeter to a cluster of buildings at the center of camp, which they called the Alamo Position. "That doesn't sound good," said Martin.

"What did you think when you got the order?"

"I really didn't like that idea," Romesha replied. "To me it felt like we were giving up, that we were kind of waving the white flag and admitting defeat in that moment of time."

"When you pull back into the Alamo Position you must have had to leave a bunch of guys out there ... all the guys on the perimeter."

"Yeah, we knew we were leaving nine guys isolated on their own, which is a gut-wrenching feeling to sit there and kind of have to call up another man and say, 'You're going to have to hold on tight for a second. We're hoping to get back to you, but this might be the last time we say anything across the radio.'"

Romesha came up with a desperate plan. He explained, "We can either sit here and die in our last final positions, or we can go out in a blaze of glory."

He turned to Lt. Andrew Bundermann, the officer in charge. "I told him we need to take this bitch back."

"That was the mission?"

"Yes. Short and to the point."

"But then you gotta get men to follow you out there," Martin said.

"Yes. That's always the scary thing about being a leader."

"All I could do was ask," Sgt. Romesha said.

"What happened when you asked for volunteers?"

"I had five guys stand up -- didn't ask, 'What are we volunteering for?' Didn't ask any of that. Just stood up."

Low on bullets, they first ran toward the front gate where their ammo dump was located. The enemy was 10-15 feet away.

The Taliban were inside the camp's perimeter. The command center sent out this chilling message:

One hour and eleven minutes into the attack, the first Apache helicopter gunships arrived overhead to find Keating in flames. Had they arrived five minutes later, Romesha believes, Keating would have been overrun.

"I just watched these three guys just walk on in like the game was over, the fighting was already done. They just literally strolled on. They don't understand we're still here? We're still fighting? Their mistake. You're not going to just stroll in here like you own the place, like you don't have a care in the world, because we are about to make you care."

The Apaches were followed by a B-1 bomber which leveled a village where much of the Taliban fire was coming from.

The village was "less than 200 meters, their closest building to our perimeter," said Romesha.

"It was. Danger close for a 2000 pounder is 1000 meters. We would rather take our chances with our own bombs than be shot by the enemy."

Finally, this message went out: "Keating reports negative contact" with the enemy. But seven Americans lay dead and one, Stephan Mace -- the platoon cut-up -- was gravely wounded.

Romesha said the end of the battle came down to saving Pvt. Mace: "That's what we were all hoping for. They attempted to do surgery on him but it was just too late. You know those medics did a whole lot for Mace, but I think it was Mace that held onto life for as long as he did, until he left. Once he left his brothers, he knew he could go home."

"I hope it never leaves."

Three years after the battle, Romesha was awarded the Medal of Honor, which struck him as "both inappropriate and wrong."

"It boils down to, why me?" he said. "I didn't do anything special. Just did a job like 52 other guys there were doing that day. And eight did way more than I ever was asked of. I mean, why me?"

"Because you were the one that lead the counter-attack."

"I think you could have replaced me with any other red-blooded American soldier," Sgt. Romesha said. "There would have been another one that would have stepped up and done the same thing."

After the battle, all of the soldiers were ordered to abandon Keating, and the outpost they had fought so desperately to defend was leveled by American bombs.,

Medal of Honor for soldier who rescued hostages
More