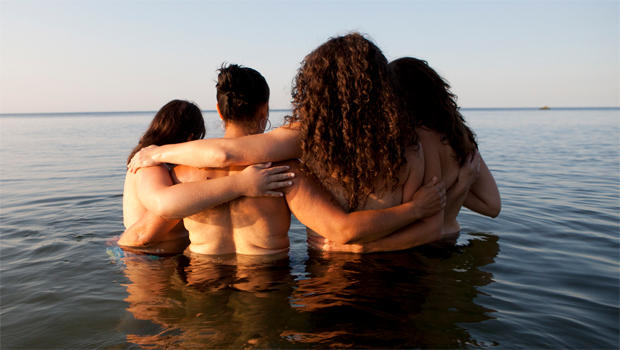 For women who've had mastectomies, what to do next is, increasingly, a matter of choice. And what some women are choosing to do may surprise you. Erin Moriarty of "48 Hours" takes a candid look:

Cancer is not just a killer. It is a thief.

"Yes, it's a loss," said Pine. "It's certainly a loss. And you learn to deal with it in whatever way you can."

Each of the women Braver met, ranging in age from 34 to 51, has lost breasts to cancer. And it's how these women chose to deal with their loss that is sparking conversation.

They call it "going flat." Instead of replacing their curves with surgical implants, these women are embracing their scars, even baring them publicly.

Melanie Testa said she had never met a "flat" person before. "Like, 'I don't get it. Where are you?'"

That was how Testa felt six years ago when she chose not to have reconstructive surgery or to wear removable breast forms. "For me, I just don't want to present two bodies. I don't want to walk out of my home with a breasted body, and then return to my home and remove my breast and then have a flat body."

"I didn't choose to go flat; it chose me," said Marianne Duquette Quoso. "That's how I look at it."

Quoso says that when she was diagnosed with breast cancer, she went from breast surgeon to plastic surgeon the same day.

"Oh, I wanted breasts. I wanted what I had," Quoso said. "They did a beautiful job and I was very happy with them."

But Quoso, one of the estimated twenty percent (according to doctors) who suffer side effects, had infection after infection. So she decided, "Let's get them out."

Another myth, they say, is that reconstructed breasts will fell just like the real thing. "They don't feel like real breasts," Quoso said.

Cullar-Ledford added, "There's no feeling, no nipple, there's no sensation."

On the other hand, Samantha West says after going flat, she gained sensation.

"In terms of sexuality, scars are very tender things, and there's feeling in my chest," West explained. "And it's still an erogenous zone, which doesn't happen with implants [which] is this foreign thing."

"When you just have a scar there, though, when you take a shower, look in the mirror, isn't that a continual reminder that you had cancer?" Moriarty asked.

"Yeah, of course it is," Testa replied.

"It's the map of who we are," said Cullar-Ledford. "And I don't want to forget what I've done and what I have been through."

Still, more than half of female breast cancer patients -- nearly 60 percent -- who are offered breast reconstruction take it.

Dr. Deborah Axelrod, a surgeon and the director of clinical breast services at New York University's Perlmutter Cancer Center," said, "I think for us as surgeons, we feel that if we're going to take a body part off, that we should then replace it with something that looks just as good."

She said reconstructive surgeries have greatly improved, and yet she agrees that looking good can have some unexpected drawbacks: "If you are a stomach sleeper and you have an implant, it's like sleeping on a Frisbee sometimes."

Dr. Axelrod now regularly discusses the option of going flat with her patients.

When asked if she thinks the majority of women will still choose reconstruction rather than go flat, she replied, "I do, 'cause it's the image of our bodies. We want to be whole."

These women hope to change that perception.

Rebecca Pine said, "Beauty is something in the mind and in the heart. We're just as feminine, we're just as much women as we were beforehand."

There is a growing awareness and acceptance of going flat, they say. There is an ad campaign for a national gym, a recent fashion show, and websites that offer stories, selfies and a sisterhood.

"What it's done for all of us, we can't even express," said Marianne Duquette Quoso.

Moriarty asked, "You're emotional -- why?"

"It was about the friendships that we've made."

Friendships that have helped each woman accept what they have lost, and also what they've gained.