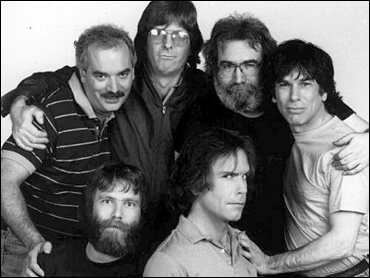 Move over, Duke Ellington. Turn around, Miles Davis. Make room at the pinnacle of 20th century American music for the Grateful Dead.

So says Dennis McNally, an historian who just published a 620-page biography, "A Long Strange Trip: The Inside History of the Grateful Dead," now on the New York Times Bestseller list.

McNally dismisses critics who say the Grateful Dead played folksy psychedelia that was little more than a soundtrack for the LSD trips of their obsessive fans -- the Deadheads.

"The band's body of work could lay serious claim to comparison with that of (Charles) Ives, (George) Gershwin, (Duke) Ellington and (Miles) Davis," writes McNally in summing up the Dead's standing.

McNally was the band's spokesman from 1984 to the demise of the Grateful Dead with the death of legendary lead guitarist Jerry Garcia in 1995. He swears that he makes such observations as an objective historian, not as band publicist.

The book is the second in what McNally says is "a two-volume history of post-World War II Bohemia." The first was published in 1979, "Desolate Angel: Jack Kerouac, the Beat Generation and America."

The Grateful Dead formed in 1965 in San Francisco and nearby Marin County just as the beatniks and poetry at coffee houses gave away to rock bands at funky bars and dance halls.

The band was made up of Garcia, Ron "Pigpen" McKernan, Bob Weir, Phil Lesh and Bill Kreutzmann. Mickey Hart joined in 1967.

Others came and went, but those six, along with lyricist Robert Hunter, are considered the core of the band. McKernan died in 1973 at age 27 of the same internal bleeding caused by alcohol abuse that killed Kerouac.

By the time Garcia died at 53 of a heart attack in a drug rehabilitation center, the Grateful Dead were among the top money-making acts in the music business, selling out almost all their shows and filling stadiums with a sea of tie-dyed fans.

Music historians may disagree with McNally's assessment of the Grateful Dead's standing alongside Ellington and Gershwin. But they cannot argue with the way they were always associated with icons of modern American popular culture.

In their inner circle was Ken Kesey, author of "One Flew Over the Cuckoo's Nest," who conducted "Acid Tests" -- basically LSD parties where the band played.

Also prominent were Neal Cassady, the inspiration for Kerouac's Dean Moriarty character in "On the Road," and Owsley "Bear" Stanley, the most famous maker of LSD, who also built the first of the band's famous sound systems.

At one of the Acid Tests, in Los Angeles, one of Kesey's "Merry Pranksters" painted his face silver and black.

A warehouse where the party was taking place was surrounded by Los Angeles police. Although LSD was not yet against the law, they were on hand after numerous reports of young people acting strangely, even though no one was drinking.

The Prankster jumped over a fence and into a garbage can, startling the cops. This inspired the famous "Blue Boy" episode of TV's "Dragnet '67" which informed the nation that freaks in California were taking a mind-bending drug called LSD.

The band's house at Ashbury Street in the Haight section of San Francisco was thought to be a main center for the nascent hippie culture in 1966.

McNally, 52, is still the publicist of Grateful Dead Productions and various Grateful Dead successor bands, including The Other Ones, who stage the first major tour in November of all the remaining Grateful Dead members.

McNally said a major difference between the Dead and other American bands is the connection between band and audience.

Most Deadheads favorite songs are the long, spontaneous "jams," or songs that go on for 30 minutes and more.

LSD went a long way to cement the bond the Grateful Dead formed with its audience, McNally said. The band stayed together for 30 years and although their collective use of LSD stopped in the early 1970s, the bond remained.

"It (LSD) changed everything, mostly because it changed the way they approached their audience," McNally said at a recent lunch interview in New York.

Garcia was hugely influenced by Kerouac's 1957 book, "On the Road" and, after reading McNally's book on the author, asked McNally in 1980 to do the band's biography.

Inviting a biographer backstage showed the Grateful Dead was aware of history. And the band members even were aware of their connection with the future, if you believe Garcia and his observations at the time the band played in 1969 at the famed Woodstock festival.

"You could feel the presence of invisible time travelers from the future who had come back to see it, a swollen historicity -- a truly pregnant moment," writes McNally, quoting Garcia.

Last month, The Other Ones played two days of sold-out shows at the Alpine Valley Resort in Wisconsin. Their performances persuaded McNally that this closest incarnation to the Grateful Dead will play on.

"I've have never seen happier musicians in my life than the guys who came off the stage in Alpine," McNally said.

McNally wants to write a third history book, this one about the Mississippi River.

"I want to write a book about the river and Highway 61 and Bob Dylan, Mark Twain, Robert Johnson and a jazz player to be named later, and the intersection of art and history and culture," McNally said.