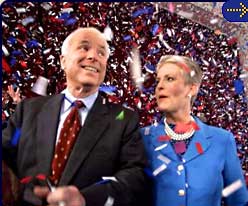 While Governor George W. Bush has been gaining in the polls, John McCain has been drawing ever larger crowds to his events. Undistracted by Iowa, McCain has visited New Hampshire more frequently than snow, holding his trademark town meetings. On Sunday, Peterborough hosted his last, his 114th, town meeting.

114 town meetings? Why not? Warren Rudman, the still-popular former New Hampshire senator, says he told McCain months ago that he could win the state if he were "willing to work like no one ever has before in the history of this primary." So McCain decided this most traditional of New England formats would serve his purpose admirably; the next step was to hold more of them than anyone else as proof of his devotion to New Hampshire.

McCain pokes fun at his own pursuit of votes; he routinely tells his audience that he's visited Dixville Notch not once, but twice (laughter) to get every one of those 29 votes (more laughter). (Dixville Notch is that wee town that always votes at midnight before everyone else in the state or the country).

His final town meeting had an almost frolicsome air. Before he arrived, children and adults batted balloons across the room to each other while a three piece band played rock music.

"I promise not to get emotional - I promise you!" McCain vowed as he started speaking. Peterborough marked the closing of his town meeting circle - he held his first town meeting here last summer, and, as he delights in recounting, his campaign offered free ice cream and only 40 people showed up. Now, two days before the primary, there was no ice cream, and the room was full to the rafters, with hundreds of people squeezing into a New England paradigm of a town hall -- a clean white room with winter sunlight pouring through tall windows.

His stump speech followed its usual pattern -- lots of jokes, grave references to honoring America's veterans and restoring its military, and a discourse on the poison of campaign finance. He talked about taxes, but didn't dwell on the topic -- he criticized Bush's plan for giving "not one penny to save Social Security," but added a key qualifying phrase -- "except for the two trillion dollars already in the fund." He told his audience, as he had yesterday, that he won't need "on the job training," which sounds like a sneer at Governor Bush. But McCain saves his angriest rhetoric for campaign finance reform -- that riff starts with a denunciation of President Cinton and Vice President Gore, but then neatly shifts to Bush, whom McCain says is "defending the system. He says it would hurt our party, but I've always believed what's good for our country is good for our party (more applause)."

When he opened the floor, after his remarks, he carefully thanked each person for his or her question. Several people thanked him back: "I appreciate the fact that you're one of the few candidates to answer questions directly," one man said, and a round of applause followed.

At the end of the session, at the end of his New Hampshire town meeting experience, confetti and balloons flew wildly around the room, streamers and sparkling strips of paper drifted onto shoulders and hair, and the band performed "Play That Funky Music." McCain signed books and chatted with people, riding his momentum as long as possible.

Is the momentum really there? The discouraging view is that he put all his eggs in the New Hampshire basket, only to see his double-digit lead over Bush evaporate. The brighter view is the one McCain shared with his audience -- "We began this race as underdogs, and now it's going to be a very close election. We might be up late Tuesday night."

Even if he wins Tuesday night, he has a long road ahead of him: he trails Bush in money and numbers in South Carolina and Michigan, whose primaries are just around the corner. The focused intimacy of his New Hampshire campaign is likely to dissipate in the need to visit a lot of states very quickly. New Hampshire, and its town meetings, have suited McCain well.