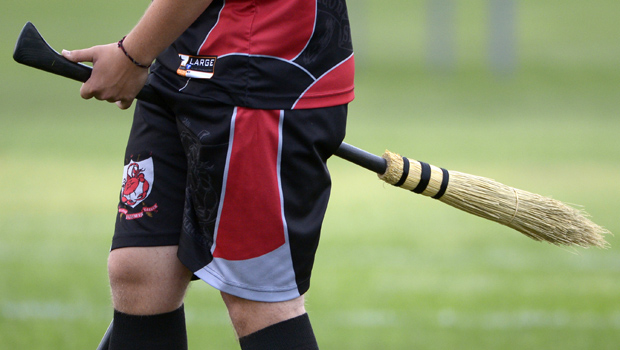 Quidditch is a contact sport, inspired by J.K. Rowling's Harry Potter series, that blends elements of tag, dodgeball and rugby. The most obvious difference to those games is that, in Quidditch, all players run around the field with a broomstick between their legs, as if flying. Because they're wizards. This basically renders them one-handed throughout play.

Quidditch is co-ed, and in fact mandates that no team can have more than four players on field at a time of the same gender (or who identify as that gender).

There are approximately 200 Quidditch teams -- many affiliated with schools and universities -- in the United States. U.S. Quidditch, the sport's national governing body, hosts nine major tournaments. [The 9th U.S. Quidditch Cup, featuring the top 60 teams, will be held in Columbia, S.C., on the weekend of April 16-17.] There is even a professional league, Major League Quidditch.

A volleyball doubles as a Quaffle, which players use to score points, either by throwing it or kicking it through a hoop.

Bludgers are dodgeball-weapons used against opposing players; hit someone with a bludger, and they are temporarily out. They must drop whatever ball they possess, head to the sidelines, and touch a goalpost before returning back to the field.

In the J.K. Rowling books, a Snitch (or a Golden Snitch) is a winged ball that tried to avoid capture. Since magical equipment is harder to come by in real life, Snitches are instead played by people dressed in yellow, who run onto the field at the 18-minute mark and must evade players who try to steal their "tail."

If a Snitch loses his tail (actually a tennis ball in a sock), the game is over, but in the event of a tie score, play goes into overtime.

Each team has seven people on the field, in the following positions:

A Seeker chases and catches a Snitch to score points, and to end the game. Grabbing the tail off of a Snitch's shorts is worth 30 points. There is one Seeker per team.

There are three Chasers who score goals by throwing or kicking a quaffle through a hoop (scoring 10 points).

A Keeper is the goalkeeper who blocks the hoops from rival chasers.

Two Beaters use their bludgers to try to disrupt other players -- and by "disrupt" we mean hurling their weapons without mercy.

Each game of three periods is played on an oval pitch, 60 yards x 36.

Chasers and Keepers advance the quaffle down the field by carrying, passing or kicking it, in an attempt to score a goal. "Bumping, grappling and incidental contact" is allowed; head-butting is not.

Within the hoop's Keeper Zone, the Keeper is immune from knockout effects employed on other players.

Committing a foul will prompt a blue card or yellow card (which lands the player in the penalty box), or a red card/ejection.

The 206-page U.S. Quidditch Rulebook (Ninth Edition) has detailed guidelines on all aspects of play, even the players' jerseys, which can feature either letters and symbols (like π or ∞) or integers, but not both!

For more information on joining a Quidditch team near you, or for starting one, visit the U.S. Quidditch website.