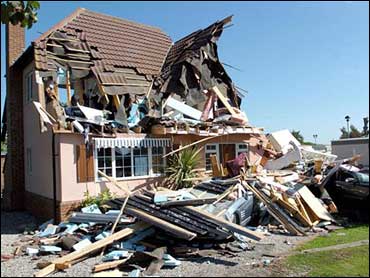 The evidence of a crime was easy to see: a house partly reduced to splinters and rubble, and a police car bashed by a mechanical digger.

Police on Tuesday were questioning a 52-year-old man arrested a day earlier at the scene of devastation in Bradwell-on-Sea, 45 miles east of London.

"If you want to see an earthquake zone, come to Bradwell," said James Harvard, owner of the house.

His partner, Janice Gledhill, said she recognized the suspect, who arrived at about 7 a.m. Tuesday, as someone who owed rent from the couple's trailer park.

Vincent Frostick, who lives opposite the house, said the man operating the digger was "very, very calm."

"He wasn't shouting or anything. He demolished the guy's two cars in the drive by lowering the bucket on to them. For about 10 minutes he just smashed into the house," Frostick said.

"After he destroyed the cars, he raised it to its full height and brought it down straight through the roof. I've never seen anything like it. ..."

Gledhill, who says she was in the house when the man arrived, was quoted by The Times newspaper as saying "He destroyed the police car and then our own cars and then started on the house. The police told me to get out. ... They couldn't do anything to stop him. I couldn't reason with him. We are just devastated."

Police said the suspect, who was arrested on suspicion of attempted murder and criminal damage, was taken to a hospital for treatment.