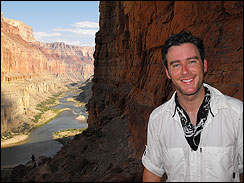 (Frank Eldredge)
Every so often I get to report on happenings outside the science/technology/space/environment beat, and it's usually for CBS Sunday Morning. Last week I got the chance to follow a dozen young people as they traveled along the Colorado River in the Grand Canyon. Starting at Lee's Ferry outside Flagstaff, AZ, we went through 89 miles of river rapids and canyon hikes to witness their adventure firsthand. On the surface, it sounds like many other summer vacations. But there's a catch -- half of these young people are visually impaired and legally blind.

Our journey lasted a full seven days but the students continued beyond our stopping point all the way to about mile 240 or so. (The producer and I hiked up and out of the canyon on the Bright Angel Trail, which leads to the main Grand Canyon observation point.) It was a low-budget trip with just me and the producer, Phil Maravilla, shooting video and interviewing the participants. The project was a joint venture between Global Explorers, Leading the Way, Grand Canyon Youth, and a couple of river-rafting companies. Also along for the ride was famed blind climber Erik Weihenmayer, the only blind man to summit Everest. He's also topped Kilimanjaro and McKinley and many others. Overall, they were an amazing group of students who worked together to overcome some daunting challenges, and we're planning to air the story on Aug. 24 on Sunday Morning.

In the meantime, it's back to the sci-tech/space/environment beat, and I'll post more in the coming days. Stay connected! 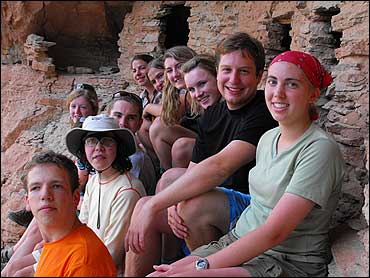