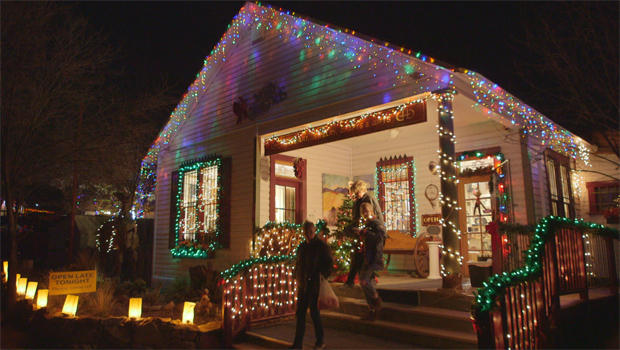 'TIS THE SEASON for visitors to flock to the town of Madrid, New Mexico for a close-up look at its unusual take on Christmas. Conor Knighton is just back:

Welcome to the tiny town of Madrid, New Mexico, where the 300-odd residents (emphasis on the odd) proudly march to the beat of their own drummer in their annual off-beat Christmas parade.

For a few brief moments every December ("Normally, it's about eight minutes!" laughed Don Cloud), this two-lane stretch of Highway 14 between Albuquerque and Santa Fe is taken over by a rag-tag collection of hippie trailers and buses, led by a red-nosed yak.

Because, well, why not?

Visitors come to gawk, but really, this is for the locals. They love throwing parties.

Just ask Santa Claus: "Yeah, well, of course we're a tourist town. Or as they say, we're a 'drinking town with a tourist problem.'"

Today, Madrid is known as its funky shops and boutiques. But each winter, the twinkling lights on these old wooden homes are a reminder of what first made Madrid famous. It's a window into a ghost town's Christmas past.

Madrid was once a bustling coal town, run by the Albuquerque and Cerrillos Coal Company. At its peak in the 1930s, the mine was churning out a couple of hundred thousands tons of coal a year. "As the town grew with the coal mining operation, they actually had up to 3,000 people here at one time," said Melinda Bonewell, who runs the Old Coal Town Museum, which pays tribute to Madrid's coal-fueled history.

A surprising number of its early residents were children. "It was kind of opposite of a lot of coal mining company-owned towns at the time," said Bonewell, "where there were whole families here. And they wanted activities for those families."

The town had access to cheap power, and so come Christmas time, Madrid sparkled. The miners built an electrified Christmas wonderland here.

"There was even reports of TWA Airlines flying over to see the lights," said Bonewell. "It was just so bright and spectacular that they re-routed their flights to see Madrid lights."

But as World War II broke out, Madrid's Christmas went dark. The miners went off to war, and when they returned, there was no longer the same demand for coal. The jobs weren't there.

So, said Bonewell, the buildings became ghost town buildings almost overnight: "They even left, like, silverware and dishes on the tables, and they just packed their cars and left."

There were a few failed attempts to sell the entire town, and Madrid was essentially abandoned -- until the 1970s, when it slowly began to be repopulated by a group of offbeat artists looking for cheap housing. "It was bikers and outlaws and artists and hippies," said Barbara Fail. "It was just a really good place to be."

Fail fell in love with Madrid, and moved here to pursue her art. She's now a proud "Madroid," and serves as President of the town's cultural preservation initiative.

"We've tried to come back, and do some of the cutouts, and some of things that were traditionally always here," she said.

Most the old plywood cutouts and decorations are gone, and Madrid's modest light display isn't going to wow anyone in 2017. But it's a tribute to the miners who worked so hard to make this place special.

It harkens back to a time when the Merriest Christmas in the Southwest came courtesy of some lumps of coal.