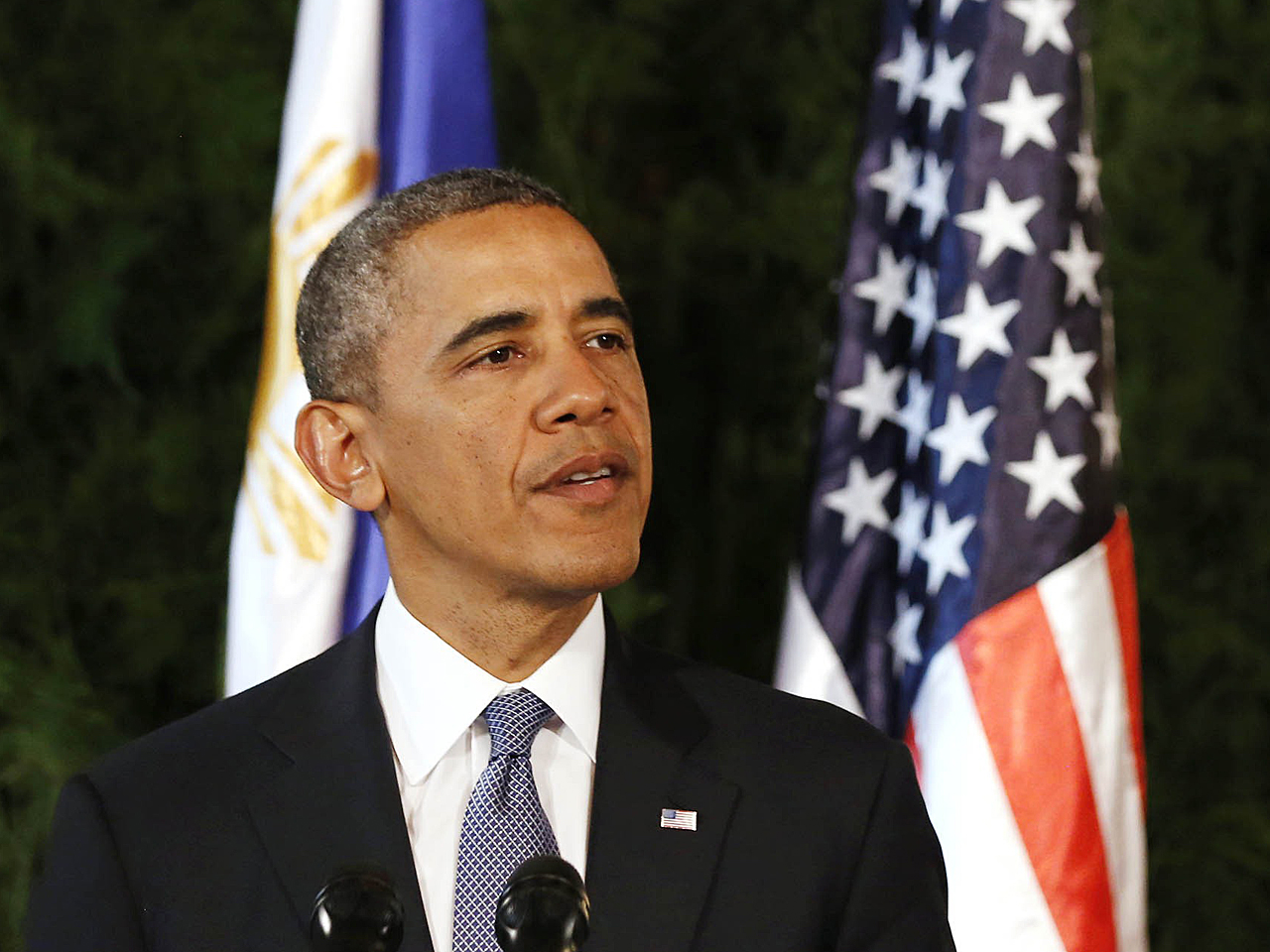 His response belied the deep frustration of a president trying to lead a world in upheaval while avoiding the aggressive military engagements abroad that helped propel him to office in 2008. His critics, Mr. Obama implied don't have an answer better than his own.

"Typically, criticism of our foreign policy has been directed at the failure to use military force. And the question I think I would have is: why is it that everybody is so eager to use military force after we've just gone through a decade of war at enormous costs to our troops and to our budget? And what is it exactly that these critics think would have been accomplished?" the president asked during a press conference early Monday morning in the Philippines.

"My job as commander in chief is to deploy military force as a last resort, and to deploy it wisely," he continued. "And, frankly, most of the foreign policy commentators that have questioned our policies would go headlong into a bunch of military adventures that the American people had no interest in participating in and would not advance our core security interests."

The president ran through some of the biggest crises that have demanded his attention in recent months. In Syria, he said, there was no appetite for a land war, so his administration aided the opposition and managed to begin the process of removing chemical weapons from the country - without initiating a military strike. In Ukraine, he said, he has led the international community in isolating Russia, but again, there is no appetite to put U.S. boots on the ground.

"Well, what else should we be doing?" the president asked. "Well, we shouldn't be putting troops in, the critics will say. That's not what we mean. Well, okay, what are you saying? Well, we should be arming the Ukrainians more. Do people actually think that somehow us sending some additional arms into Ukraine could potentially deter the Russian army? Or are we more likely to deter them by applying the sort of international pressure, diplomatic pressure and economic pressure that we're applying?"

Between the meltdown in the Middle East prompted by the Arab Spring, an aggressive China in the far East and a Russia determined not to be written off as a world super power, the president has had to chart a course in unknown waters. And to an extent, he is limited by the choices offered by the world around him.

"When these crises are dictated by forces beyond our control and which we didn't instigate, you have to ask yourself: will the next president in any of these cases, find the situation any clearer?" said Anthony Cordesman, a national security analyst at the Center for Strategic and International Studies. "Will we have better options? And I think in most of the areas -- the Middle East, Asia, Europe -- the fact is these are not situations which anyone is going to resolve."

For the armchair analysts - particularly many Republicans in the Senate who work on foreign policy issues - the president's woes are a product of his inability to act quickly and decisively.

"I'm very concerned that, as we've seen from this administration on so many tough issues, their policy's always late, after the point in time when we could have made a difference in the outcome," Sen. Bob Corker, R-Tenn., the top Republican on the Senate Foreign Relations Committee said on CBS' "Face the Nation" Sunday.

Corker is currently crafting legislation aimed at prompting a more aggressive U.S. response to Russia by strengthening NATO, imposing sanctions on the energy sector and some of Russia's financial institutions, and providing military aid and other assistance to Ukraine and neighboring countries who feel threatened.

"The Obama administration has been in reactive mode, allowing Russia to continue their destabilization of eastern Ukraine without ever facing severe consequences that might prevent further intervention," said Corker in a statement through a spokeswoman. "Considering U.S. policy has been ineffective in stopping Russia's actions so far, I'm hopeful members of both parties can embrace this comprehensive and more regional approach to defend U.S. interests in Europe."

Corker's assessment that Mr. Obama should have acted more quickly may not be wrong. Cordesman said there are some circumstances -- in particular the civil war in Syria -- where Mr. Obama has been slow and uncertain.

Zarate sees, in Mr. Obama's comments, a mismatch between the president's perceptions of his effectiveness around the world and the realities on the ground.

"Our allies are unsure of where America stands on many of its key policies, our enemies appear emboldened and our competitors are probing our weaknesses," he said.

Zarate also said that the president has done "a grave disservice" by equating the need for American leadership abroad and a coherent foreign policy with the use of military force. That, he said, "is a very simplistic and now overused straw man argument to deflect what is a fair criticism of the lack of a foreign policy that is coherent and understandable to our allies our competitors and our enemies."

Cordesman noted that the president's critics largely have not clamored for military interventions abroad.

And whether it's a fair defense or not, Mr. Obama is frustrated - and clearly has the lessons of the Iraq war hanging over his head.

"The point is that for some reason many who were proponents of what I consider to be a disastrous decision to go into Iraq haven't really learned the lesson of the last decade, and they keep on just playing the same note over and over again. Why? I don't know. But my job as commander in chief is to look at what is it that is going to advance our security interests over the long term, to keep our military in reserve for where we absolutely need it. There are going to be times where there are disasters and difficulties and challenges all around the world, and not all of those are going to be immediately solvable by us," he said.