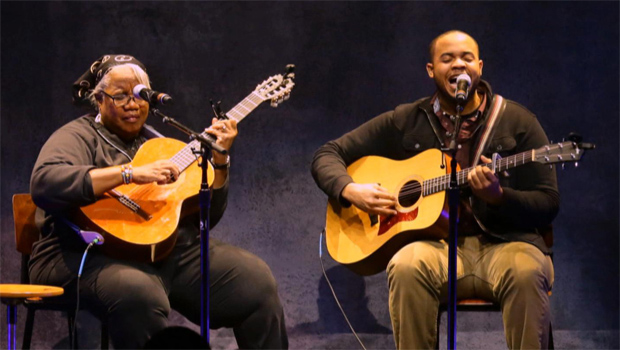 Who better to sing the praises of the bond between mother and son than a mother and her son? Introducing Madisen Ward and the Mama Bear. Nancy Giles does the honors:

Music and family have gone together as long as there's been, well, music and family. But perhaps there's never been anything quite like Madisen Ward and the Mama Bear.

This mother-and-son musical duo is the hottest thing out of Independence, Missouri, since President Harry Truman.


"Can I call you Mama Bear?" asked Giles.

"You can call me whatever you want to call me!" replied Ruth.

The music starts at the Ward family's dining room table -- the practice room, or as Ruth Ward calls it, "the magic room."

"I get off work every day and just sit right here," said Madisen. "And she'd sit there. Have a couple coffees. And then we just start writing, start practicing."

It might seem like an odd combination -- mother and son, different generations with different musical tastes. While they both picked up guitars and started singing at about the same age, there's a 37-year gap between them.

Madisen is the youngest of Mama Bear's three children, and the only one to follow in his mother's musical footsteps. In fact, at 19 he followed her all the way to the coffee houses downtown where she used to play.

Giles took a walk downtown with Ruth, Madisen, and his dad, Kenneth Ward, Ruth's husband of 35 years. It was quiet in Independence -- the Ben Franklin Five and Dime is closed down now; the Englewood Movie Theater's closed down, too. "It's a ghost town," said Madisen.

"They open up every now and then," said Kenneth.

Don't worry: the arts are alive in Independence. Giles sat in on a rehearsal at one of Madisen and Ruth's favorite venues, the Backroom Gallery.

"Did it happen just being around the house and sort of hearing each other practice?" asked Giles. "Or was there a particular moment when, like, light bulb, 'We should do this together'?"

"I think it happened a lot whenever we would go play live in the coffee houses," said Madisen. "We would go up and she would do her song and I would sit in and just start playing lead. And then I would do my original stuff, and then she would sit in and just play lead. So once we started realizing this is sounding pretty decent, in harmonizing with each other, we were, like, 'We're just gonna go ahead and make this a duo, and stop trying to deny what's happening.'"


Before Ruth Ward was anybody's "Mama Bear," she was Ruth Whitlock, a teenager from South Bend, Ind., with dreams of being a singer or playing in a band: "So at 19, I got a guitar, and I started working on songs."

Ruth made the rounds of the Midwest coffee house circuit, honing her skills along the way. Then along came Kenneth, and kids.

Neither Kenneth nor two of their other children are part of the group. So, asked Giles, "Did they ever look at you guys, and they're, like, 'Oh, Mom and Madisen...'?"

"They did that for a while, I think, in the beginning stages," said Madisen, "whenever we'd get maybe an article at a local paper. They support it. But they just kind of roll their eyes. 'It's our family, whatever.' We all give each other a hard time. We keep each other honest!"

They started playing together six years ago, making a name for themselves in local clubs. An appearance at last year's Americana Music Fest in Nashville landed them on Rolling Stone's list of "20 Best Things We Saw."

Then came their biggest national appearance so far, with a performance on "The Late Show with David Letterman."

At 63 Ruth could be enjoying retirement; instead, Madisen Ward and the Mama Bear just finished their first European tour, and their first CD, "Skeleton Crew."

Giles asked Ruth, "Was it difficult for you to stop being lead singer and let Madisen sort of take over?"

"No, it wasn't difficult," she replied.

In the end, there's no sweeter music than that.

To hear "Dead Daffodils" from "Skeleton Crew," click on the Soundcloud player below.