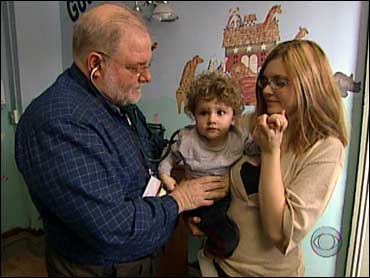 By salary standards, Bob Paeglow may be the least-successful doctor in America, CBS News correspondent Steve Hartman reports in this week's Assignment America.

He's got thousands of patients, but not one country club membership. His family lives in the worst neighborhood in Albany, N.Y.

Fortunately, Paeglow didn't go into medicine for the money. He went into it — pretty late in life — because he kept having a vision of himself in old age he didn't like: "That the world was no better because I was a part of it than if I'd never been born."

At the age of 36, Bob gave up his career as a quality control technician, went to medical school and set out to improve the quality of the planet.

He opened his office in a neighborhood where most doctors wouldn't open their car door, and welcomed in all the people mainstream medicine would rather ignore. People like Belinda.

Belinda is a first-time patient. She has clinical depression — but no insurance.

"I can't in good conscience sit in front of a patient and say, 'You need this and I can't help you, get out of here.' I can't let that happen," Paeglow says. "My people are going to get what they need to the best of my ability."

In this case, that means visits with a counselor, at Paeglow's expense. In other cases, it means giving his patients not only a prescription but a check to pay for it. Not to mention that he provides a lot of non-medical care.

Lateesha has been going through a tough time lately. Her dad — one of Paeglow's patients — is fighting colon cancer. That's why the doctor prescribed a little distraction: He threw her a little birthday party.

He does this kind of thing all the time.

Paeglow takes absolutely no salary and survives mostly on donations, reports Hartman. But even when people give him money for him, he usually plugs it right back into the practice. Every penny he makes goes back to his patients in one way or another.

Does that make him the least-successful doctor in America? Or the most?


If you would like to donate to Koinonia Primary Care, checks may be made payable to:

And should be mailed to:

Soldiers to get Purple Heart after CBS News report