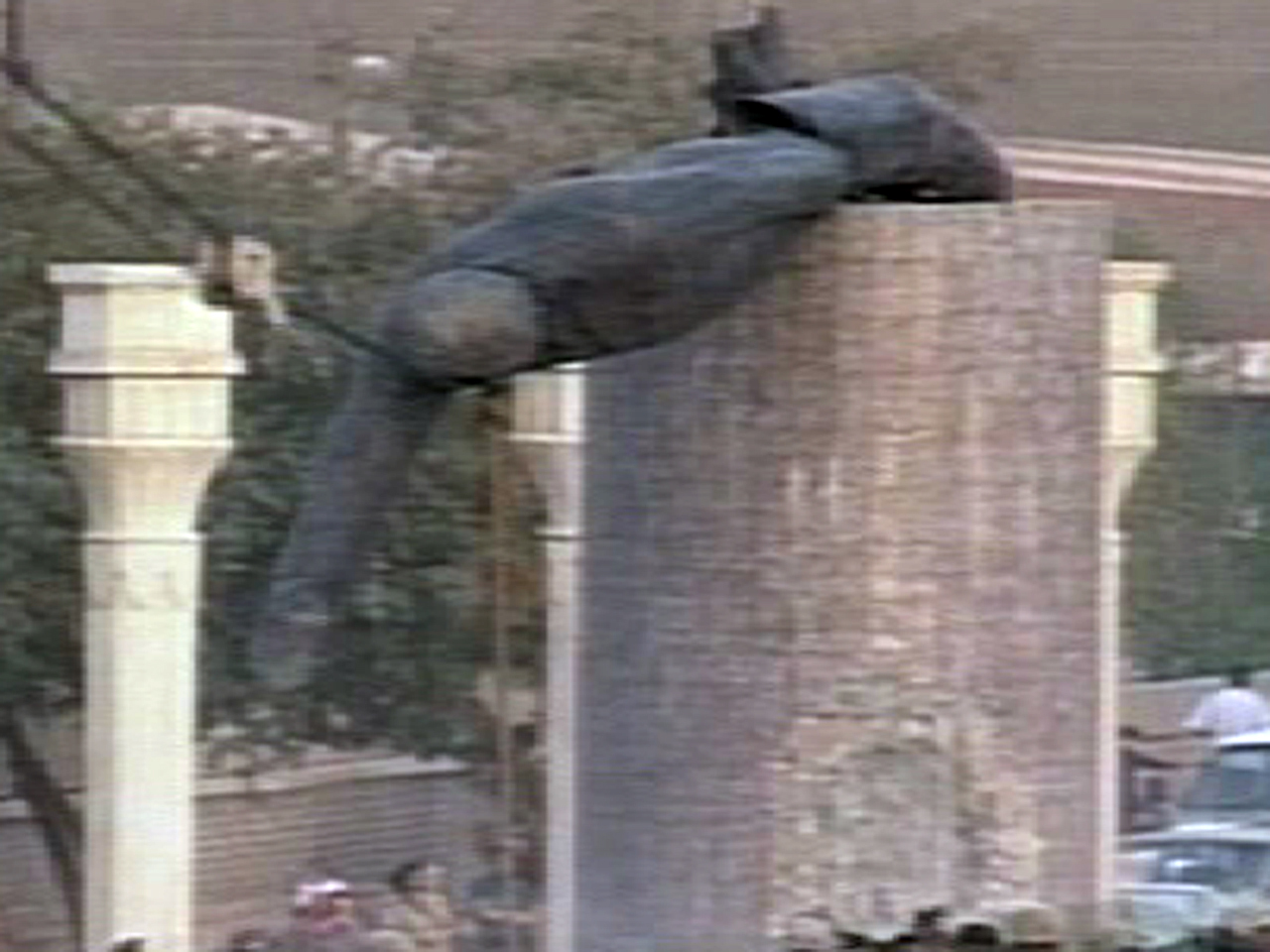 (CBS News) -- Americans will debate the wisdom or the folly of the war in Iraq. In a recent poll, opponents of the war outnumbered supporters 54 percent to 38 percent .

April 9, 2013 marks the tenth anniversary of one of the most symbolic moments in the Iraq War -- the fall of Saddam Hussein's statue in central Baghdad.

But the event is remembered very differently by two men who were present that day.

Three weeks into the war, Marine Sgt. Ed Chin got the order: Help the Iraqis celebrating in Baghdad's Firdos Square topple the statue of Saddam Hussein.

"My captain comes over and he's got like this package. He hands it to me and he's like, he tells me there's an American flag in there and when I get up there, you know, he's like, show the boys the colors," said Chin.

It became the iconic moment of the American invasion.

"A wind, actually just blew the flag around his head and that's why he was just kind of like a noose, a hangman's noose," said Chin.

Was the Marine aware of the symbolism of the moment?

"For me personally, what went through my mind is, you know, we're another step closer to home," he said.

Kazem al Jabouri, an Iraqi blacksmith, had been sledge hammering at the base of the statue.

He saw Chin with the stars and stripes at the top and grew enraged it wasn't an Iraqi flag.

"I did not like that. I even swore at him. I told him 'This is wrong!'" he recalled.

Chin said he remembered al Jabouri but said he couldn't hear the Iraqi cursing at him.

Kazem al Jabouri now lives in Beirut where he runs a motorcycle shop. He said Baghdad was not safe enough for his family.

"Saddam Hussein maybe held us 100 years back, but now, we have been pushed back almost 300 years."

Iraq War: Was it worth it?
Bombings in Iraq kill 65 a decade after U.S. invasion
Poll: Majority thinks U.S. should have stayed out of Iraq
Much of $60B from U.S. to rebuild Iraq wasted, special auditor's final report to Congress shows
Retired Gen. Norman Schwarzkopf dead at 78


But Kazem al Jabouri has moved past anger -- and into regret. "If this Saddam statue still existed, I would put it up again," he said.

He is basically saying he wishes Saddam Hussein was still in power.

Chin believes Saddam Hussein was a tyrant and had to go but he understands the hopelessness fueled by ten years of civil war once the statue came down.

"I think there'd probably be a lot of questions from them. Why did we do it? You know, what were we there for? And it would be very hard for me to answer those questions, too," said Chin.