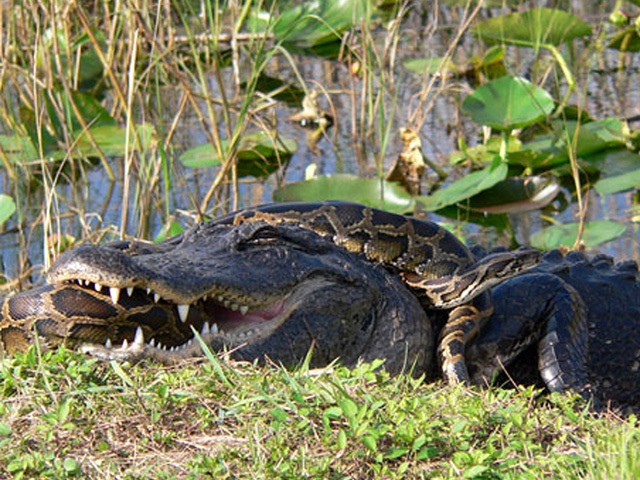 Think you stuffed your face on Thanksgiving? That's nothing compared to what a Burmese python can eat. The snakes, which can grow up to 20 feet, devour animals as large as deer and alligators, thanks to a number of adaptations that let them consume enormous quantities of food.

Biologists at the University of Alabama took X-ray images of a Burmese python after it swallowed an alligator to observe the digestion process. Pythons are able to swallow their meals whole by dislocating their jaw.

"When it does eventually capture a prey and feed, the python's previously dormant gut rapidly resumes function to tackle the difficult task of digesting a prey that may exceed half of the python's own body mass," biologist Stephen Secor writes in the Journal of Experimental Biology.

Once prey is ingested, the reptile's gut tissue begins secreting digestive acids and enzymes to digest the alligator's soft tissue. Hydrochloric acid production in the gut increased and the gut pH drops from 7.5 to an acidic 2.

The snake's metabolic rate increases by up to 40 times until digestion is complete. A number of the reptile's organs -- heart, liver, pancreas, kidneys -- also nearly double in size.

Pythons won't need another meal for several weeks or months. Humans however, will be eating leftovers for days.