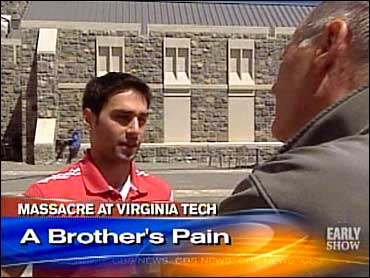 Reema Samaha, a vivacious 18-year-old Virginia Tech freshman, was one of the students killed during Monday's shooting rampage.

She grew up in suburban Washington, D.C., only about a mile away from gunman Cho Seung-Hui, and though they attended the same high school, because of the five-year gap in their ages, they were not acquainted.

Harry Smith spoke with Reema's grieving brother, Omar Samaha, himself a Virginia Tech graduate, who said of the whole experience, "It's going to take a while to sink in."

At first, he recounted, his sister was "apprehensive" about the large university, but once she found her sea legs, she began to "flourish" there. "She started to take things on. She was doing everything here."

In addition, Samaha recalls Reema as being "a girl with high moral standards. And she had — you know, she was persistent. She never gave up. I looked up to her because of her standards and her values. Because I feel like she was one of the few people I know ever to be like that good of a person. She really was a good person."

After Samaha and his parents heard initial reports about the massacre at the school, they attempted to reach Reema by phone. And when they couldn't contact her, they made the three-and-a-half hour drive to Blacksburg, though at first, "I just thought it was something small they blew out of proportion," he remembered.

But once they reached the campus, a friend of an EMT eventually gave them the bad news, that Reema was one of Cho's 32 victims.

Her death has left him and his family "floored, just completely floored. Just in shock," he said. "That's one of the hardest things for me, other than the fact that she's gone, is to see my parents and my sister — my other sister — like this."

"To support my family," he said. "I need to take care of them. I eventually (need to) take care of myself as well … I need to heal. I don't want to feel pain anymore — what I feel is just indescribable. I just want it to go away. I just wish it never happened."