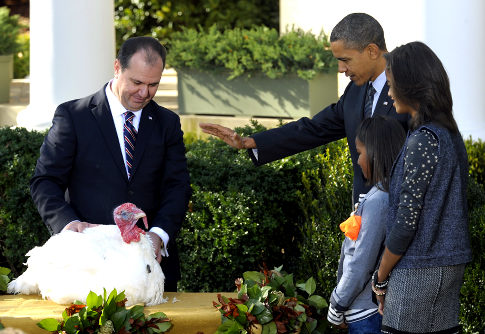 President Barack Obama split his lip open playing basketball with friends and family the morning after Thanksgiving. The president's love of basketball was well known long before his post-Turkey Day pick-up game left him needing 12 stitches in his lip.

Obama is far from alone in having highly-publicized, non-life-threatening accidents or missteps while being the White House's main occupant.

Here's a brief history of some other recent famous presidential accidents and missteps.

In January, 2002, former President George W. Bush was enjoying some pretzels on the couch in his bedroom during a Baltimore-Miami NFL playoff game. A piece of a pretzel got lodged in his throat, causing him to choke and pass out briefly. He fell down and his glasses cut and bruised his cheek.

"If my mother is listening, mother, I should have listened to you: Always chew your pretzels before you swallow," Bush later said.

While former President Bill Clinton managed to avoid any major physical injuries during his time in the White House, one of the more enduring legacies of his time in power were his intimate dalliances and the questionable way he publicly responded to them.

When testifying before a grand jury about his relationship with former White House intern Monica Lewinsky, President Clinton attempted to avoid directly answering a question by responding: "It depends upon what the meaning of the word 'is' is."

In January, 1992, former President George H. W. Bush threw up copiously into the lap of Japanese Prime Minister Kiichi Miyazawa during an official dinner in Japan before passing out. The incident was later chalked up to a bout of the flu by the president and his doctors.

The video and story of Bush's infamous regurgitation became so widely reported that Urban Dictionary claims it gave rise to a new Japanese slang term: "bushusuru." It literally means "to do the Bush thing," and is a euphemism for vomiting.

Ronald Reagan inadvertently set back U.S.-Russia relations when the sound-level check of his regular Saturday radio broadcast was accidentally released.

Former President Jimmy Carter was on a solo fishing trip in April 1979, when he realized a large "swamp rabbit" was swimming for his boat, hissing. He splashed his paddle at it until it went away.

After Carter's press secretary offhandedly shared the story with a reporter, The Washington Post ran the headline, "President Attacked by Rabbit." It would be a couple of decades before the story was cleared up.

Despite winning two national championships as a member of the University of Michigan football team, former President Gerald Ford was remembered by many as being a klutz.

In a famous incident later parodied by comedian Chevy Chase repeatedly on Saturday Night Live, President Ford tripped and fell on a rainy day down the slippery steps of Air Force One while holding his wife Betty's hand, perhaps giving credence to his legacy of clumsiness.

Former President Richard Nixon took to the podium in November, 1973, to defend his reputation against an increasing public outcry over what many saw as criminal behavior in the Watergate Hotel break-in scandal.

Just nine months before he became the first president to resign in what some called a bid to avoid impeachment, Nixon held a press conference famously declaring, "I'm not a crook. I've earned everything I've got."

Almost Over Before It Began

President Lyndon B. Johnson was almost shot by a jumpy secret service agent shortly after swearing in for the first time following President John F. Kennedy's assassination, a new book reveals. Former agent Gerald Blaine told The Daily News he had activated the bolt on his Thompson submachine gun and put it to his shoulder, when he heard footsteps outside Johnson's Washington Mansion. Blaine said he stopped just before he pulled the trigger.

"I swear he turned white," Blaine said. "He had just walked out for a breath of air! He hadn't told anyone."