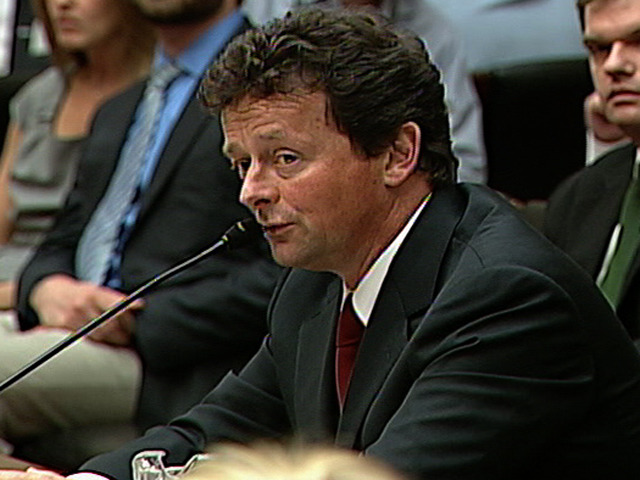 BP's embattled CEO Tony Hayward arrived on Capitol Hill this morning to a swarm of cameras, still photographers and reporters waiting for him the moment he enterned the Rayburn House Office Building.

Hayward made a beeline to the hearing room, ignoring reporters' questions, but found a whole other scrum of journalists waiting for him inside. He had to withstand an awkward five minutes just standing by the witness table as dozens of still photographers snapped photos and about 20 cameras surrounded him to get their shots.

When the hearing finally began, Hayward sat all alone at the witness table with a cup and a pitcher of ice water in front of him. He looked exhausted as he listened to members' opening statements for almost two hours before he began his own.

House Energy and Commerce Chairman Henry Waxman came out swinging, saying that top executives at BP were "oblivious" to saftey issues with the Deepwater Horizon rig. Waxman also reminded Hayward that when he first became CEO of BP, he'd promised to focus on safety "like a laser."

Hayward sat through members questioning whether he should still hold his job, as well as members who played tapes of widows of the oil rig workers who died, asking for those responsible for the spill to be penalized harshly so their husbands' deaths would not be in vain. But then there was a moment of great reprieve for the CEO.

"I apologize," said Rep. Joe Barton (R-TX), the top Republican on the Energy and Commerce Committee, to Tony Hayward.

Audible gasps could be heard in the hearing room.

Barton was objecting to the $20 billion escrow account to pay claims that the White House pressured BP to accept. He said it amounted to a "shakedown."

Barton's apology caused a firestorm. He may have actually had a worse day than Tony Hayward. House Republican Leader John Boehner almost immediately told reporters that he disagreed with Barton's categorization. One Republican who represents Pencsacola, Fla. even called for Barton to step down from the top GOP post on the Energy and Commerce Committee.

While Barton, who'd left the hearing, huddled with GOP leadership in Boehner's office, Hayward played a game of dodge ball that infuriated lawmakers. To almost any specific question about cement bond logs or the Macondo oil well, Hayward refused to answer, saying that he could not until the investigation into the spill is complete. He did divulge that no employee at BP has been fired yet because, he said, "the investigation is ongoing." Rep. Cliff Stearns (R-Fla.) sarcastically asked Hayward if he could answer whether today is Thursday or not.

Hayward answered with a straight face that "it is Thursday."

Later in the afternoon, the actor Kevin Costner and his daughter dropped by the hearing to witness the show, but all eyes were on Rep.Joe Barton, who'd returned to the hearing room after him meeting with Boehner.

After a few rounds of oil spill-related questions, Barton asked if he "might take a small point of personal privilege." Barton said, "I want to be absolutely clear that I think BP is responsible for this accident, should be held responsible and should in every way do everything possible to make good on the consequences that have resulted from this accident."

When Barton left the hearing again, reporters and cameras followed him to his office down the hall. Barton wouldn't say much except that he stands by his statement. He would not say what GOP leadership had said to him in this afternoon's meeting.

It was clear seven hours after the hearing began, that Joe Barton had actually learned a thing or two from Tony Hayward about saying as little as possible.

Jill Jackson is a CBS News Capitol Hill Producer. You can read more of her posts in Hotsheet here. You can also follow her on Twitter.
View CBS News In