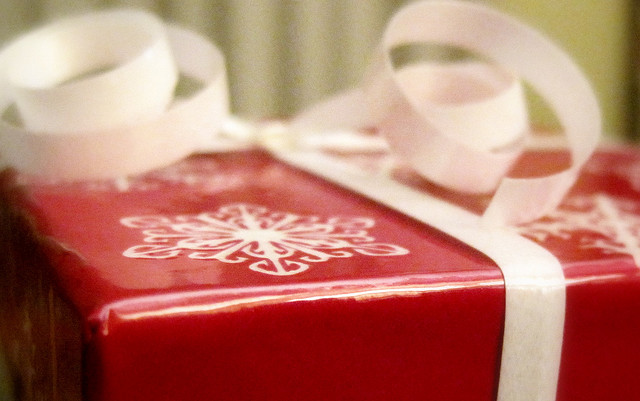 With less than two weeks to go until Christmas, you can rest assured that bosses everywhere will be handing out presents. Some of these presents will be great, some good, and some merely okay. But here are nine true stories of ones that were exceptionally bad.

Alison: When I turned 21, my boss gave me a pack of wine coolers and a gift certificate to Victoria's Secret. Seriously. I was too young to realize how wildly inappropriate this was, but old enough to know that I felt creeped out by it.

Tax is on you

Alyssa: One year my sister worked at a major theme park and was required to work on Christmas Day. In acknowledgement of this, her boss gave all of the hourly employees a present: A gift certificate for one of the in-park vendor stands for a medium soda OR a banana. (Yes, those were the two choices.) When she cashed hers in for a banana, she was told that the gift certificate did not cover sales tax and had to pay that out of pocket.

Something useful and inappropriate

DragonLady: Worst gift I can ever remember receiving was a pack of sanitary napkins. The wrapping was nice, mind you, with ribbons and all. And even with a card that says, "Something useful, from:" And when we all opened it there in the office afterward, imagine our shock when we found all the women in the department received the same gift. Our boss (a guy) was known to be a chauvinist, but until that day, we did not know how bad it was. He came over after seeing us opening the presents and even smirked, "I hope I got your preferred brands correctly." Needless to say, we resigned one after the other in quick succession in less than two weeks.

Gift-giving rules for the workplace

Stale pastries and an insult

Dee: At my first job out of college, I worked as a legal secretary for a couple of partners at a small law firm. I'd been there over a year and had become accustomed to jokes at my expense, borderline verbal abuse from both the lawyers and dissatisfied clients, being expected to work long hours with no overtime pay and being pestered in the elevator on my way back from getting the mail as to how much money had come in that day. (Really a winner of a first job!) One day, a partner came in with coffee from the cafe downstairs and said, "You know, when I was in law school, I couldn't afford good coffee and fresh pastries." (Hath hell frozen over? Has he bought me coffee?) At which point he says, "All I could afford were day-old muffins," and tosses a stale muffin at me, leaving a nice grease stain on my blouse when I failed to catch it. That was my only gift in the 15 months before I quit -- a stale muffin.

Wonder_aloud: The first year at my current company they called everyone down by team and gave them grocery store gift cards for $7.58. And they made you sign for them.

Religion in the workplace

Dani: The boss at my last job was very religious, and so one year she handed out little books that seemed to have come from her church bookshop. I got fairly lucky with something Christmas-related (useless but non-offensive). Two of my co-workers got titles along the lines of: "Answers to all the big questions in life" and "Why other religions are wrong," handed over with a smile and a "I think this book really fits you." And no, we were not in any way affiliated to a religious organization, nor were any of my co-workers particularly religious.

Stolen by the boss

DLD: One year after the holidays, I was standing at my desk when my boss went by. I showed him the scratch pad my sister had given me (it had that sketchy cat form The New Yorker cartoons on it). I said, "Look at this great scratch pad my sister gave me for Christmas!" He stopped, looked, took it, said "Thank you," and went on into his office. From time to time he would send me notes written on it.

Lara: One year I was hugely pregnant in December with just days to go and my boss gave me a keychain in the shape of a pregnant woman. It was clear, and inside her belly a little baby bobbed around in liquid. I think it was meant to be funny, but mostly it was disturbing.

A bonus of your own paycheck plus a bank fee

Alyssa: Last year at Christmas each employee at my husband's firm received an envelope containing $100 cash. Presuming this was a holiday bonus, we spent it on groceries, some things for our two kids, a dinner out, etc. Like a lot of grown-ups, our paychecks are deposited electronically and we have many bills drafted out the same way, such as our utilities, car insurance, etc. A week later, on payday, we discovered in the worst possible way that the $100 was not a gift, but was simply deducted from my husband's salary and presented as cash. Because his week's pay was now $100 less, suddenly all the drafts of our bills began coming out of an account that was $100 smaller than it was supposed to be, until finally, a check bounced and the bank charged us $36.

What's the worst gift you've ever received from a boss? Or if you're a bad boss, confess in the comments section what rotten presents you've purchased.

Trouble at the office: When to go to HR, and when not
Suzanne Lucas