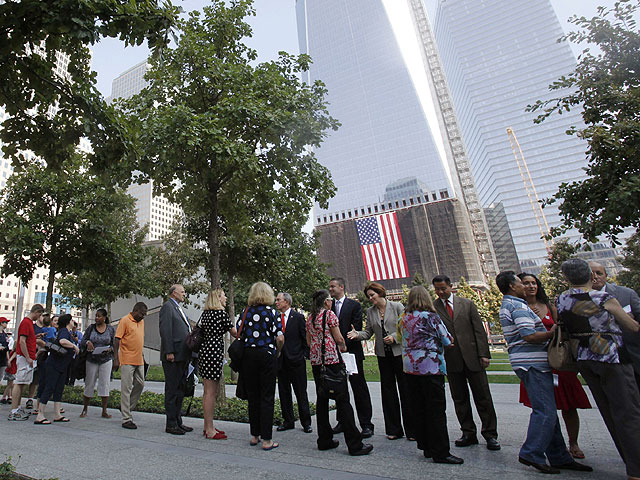 NEW YORK - The plot of land known for a decade as "the pile," "the pit" and "ground zero" opened to the public Monday for the first time since that terrible morning in 2001, transformed into a memorial consisting of two serene reflecting pools ringed by the chiseled-in-bronze names of the nearly 3,000 souls lost.

The 9/11 memorial plaza opened its gates at 10 a.m. under tight, airport-style security. Visitors were allowed to walk among hundreds of white oak trees on the eight-acre site and gaze at the water on the exact spots where the World Trade Center's twin towers stood.

They will also be able to run their fingers over the names of the 2,977 people killed in the terrorist attacks in New York, at the Pentagon and in Pennsylvania, as well as the six who died in the bombing of the trade center in 1993. Electronic directories with a "Find a Name" button will help people locate their loved ones.

The memorial plaza opened to the families of the victims for the first time on Sunday, the 10th anniversary of the attacks.

Sufia Simjee of Baltimore traveled to New York to mourn her cousin, Nasima H. Simjee, a financial analyst killed on Sept. 11. She said family members never received Nasima's remains; now, at least, they have a place to leave flowers.

"It gives us a place to honor her," she said.

Although thousands of construction workers have come and gone from the site over the years, Monday marked the first time that ordinary Americans without a badge, a press pass or a hard hat were able to walk the grounds where the victims were once entombed in a mountain of smoking rubble.

"For the vast majority of the world, the images that they remember from this site are very difficult. It's the recovery period, it's seeing those images of the towers falling. So when they come on now and see this place that's been transformed into a place of beauty, it's exciting," memorial president Joe Daniels said Monday before the memorial opened.

Admission is free, but access will be tightly controlled. Visitors need to obtain passes in advance, allowing them to enter at a specified time. No more than about 1,500 at a time will be allowed in.

Visitors will have to empty their pockets, walk through a metal detector and send their handbags and backpacks through an X-ray machine.

(One World Trade Center, left, formerly known as the Freedom Tower, at ground zero is lit up in red, white and blue as two light beams known as The Tribute in Light representing the Twin Towers beam into the sky in Lower Manhattan in honor of the 10th anniversary of the Sept. 11 terrorist attacks, Sept. 12, 2011, in New York.)

Much of the memorial complex is still under construction, including the museum portion. The museum pavilion, a tilting structure that evokes the sections of the trade center facade that remained standing after the towers fell, is scheduled to open on the 11th anniversary of the attacks.

Eventually visitors to the underground portion of the complex will be able to gaze at such sights as the giant slurry wall, built to keep the Hudson River from flooding the trade center's foundations, and the survivor's staircase that allowed so many people to flee to safety.

But seeing the names was enough for many of the families.

"It breaks me up," said David Martinez, who watched the attacks from his office in Manhattan and later learned that he had lost a cousin and a brother, one in each tower.

Paying tribute to the victims of 9/11
Obama traces trail of 9/11 terrorist attacks
N.Y.C.: Moments of silence at ground zero

Debra Burlingame, whose brother, Charles, was the pilot of American Airlines Flight 77, cried when she found his name, grouped with other crew members and passengers aboard the flight.

The letters in the names have been entirely cut out of the bronze, with only emptiness beneath them.

The centerpiece of the memorial is the two giant, square pits and reflecting pools that sit in the footprints of the two towers. The waterfalls cascading down the four walls of each fountain are the largest such fountains in North America.

Skyscrapers are now pushing upward all around the plaza, and the roar of construction will be a constant at the site for some time.

One World Trade Center, the spire once called the Freedom Tower, is now 1,000 feet high and well on its way to becoming the tallest building in the U.S. at 1,776 feet — higher even than the twin towers. The steel skeleton of the new 4 World Trade Center is 47 stories high and counting.

The memorial foundation has arranged for a separate entrance for relatives of the victims and plans to set aside certain days or hours where the plaza will be open only to firefighters, police officers and other emergency workers.

"People will have that very special feeling of stepping on ground that the public has not in the last 10 years," Daniels said last week.

As for the tight security, he said: "It's an inconvenience, but if you think about any site in the world, I think this is a place that people will expect to go through some security."