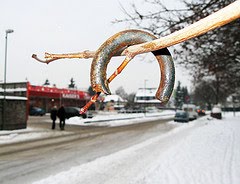 Dear Evil HR Lady,
There are two of us in equal positions at my office. The excuse our Manager used for not promoting either of us was that there could only be one promotion and therefore it would not be forthcoming this year because if one was promoted the other would make too much fuss. Since that time this other employee has been determined to undermine me with our boss by finding fault with everything I do, even to point of saying I am not qualified for my job, lied about my number of overtime hours and quoted me as saying I thought he was an idiot. I find my boss is buying everything she says. What can I do at this point to help save my job and bring attention to fact she is deliberately trying to get herself promoted by sabotaging me.
First of all, your boss is a full fledged weenie manager. I realize that's not a technical term and you won't find it in any business book, but that's what he is. A weenie. I'm going to tell you a secret here, you didn't get promoted last year because your boss didn't want to promote you. You wouldn't have gotten promoted even if you had no coworker.

And your coworker wouldn't have gotten promoted last year even if you hadn't been around.

Your boss is trying to blame outside forces beyond his control (i.e. you two couldn't handle unequal positions) instead of owning his decision to not promote either one of you. Now, it is also true that the reason is that at least your coworker is immature and couldn't handle it, but if it is only a problem with your coworker then your manager should have promoted you anyway and managed the coworker.

Managing is difficult to do, so frequently people with manager titles avoid managing like the plague.

Now, what do you do?

Now, in an extra negative note, I wouldn't at all be surprised if neither one of you end up with a promotion at the end of this year. But because you're going to be working on developing your relationship with your boss, you'll know what he values and you'll be in a much stronger position than you were last time around.

Leaving your job? How to start the conversation
View CBS News In
CBS News App Open
Chrome Safari Continue
Be the first to know
Get browser notifications for breaking news, live events, and exclusive reporting.