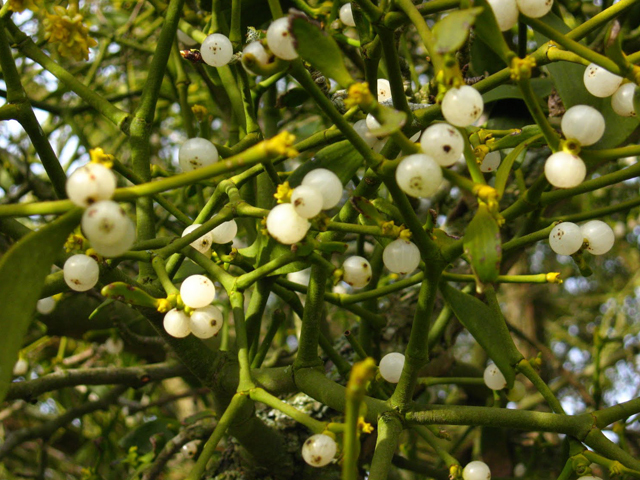 Think mistletoe is all about holiday romance? Think again. The festive plant -- which also goes by the name devil's fuge -- holds some sinister secrets.

1. Mistletoe is a parasite

Mistletoe is an evergreen pest that attaches itself to trees, plants and shrubs, stealing their nutrients and water. This can weaken or disfigure the host plant, and eventually even kill it.

"When you get a heavy infestation, it keeps sucking strength away from the plant," according to Rick Gibson, a plant expert at the University of Arizona. "It's almost like a cancerous type of growth."

2. Mistletoe is really hard to get rid of

Once it infects a tree, mistletoe is difficult to remove. When its seeds sprout, they grow through the bark of trees and into their tissues, extending up and down within the branches. Even if you cut off the visible portion of the invader, new plants often grow from inside the host. The most effective way to fight it is to remove an infected branch or limb entirely.

Eating any part of the plant can cause drowsiness, blurred vision, diarrhea, nausea, vomiting, weakness and seizures. The symptoms are caused by a poisonous ingredient called phoratoxin, which is found in all parts of the plant, including the berries, and is especially concentrated in the leaves. Eating the plant raw or drinking it in tea can cause poisoning.

4. But it also has medicinal properties

Despite its dangers, mistletoe has a history of medicinal use. The European varieties have been used for centuries in traditional medicine to treat seizures, headaches, infertility, hypertension and arthritis.

According to the National Center for Complementary and Alternative Medicine, part of the National Institutes of Health, mistletoe injections are available only in clinical trials in the U.S., but are available by prescription in Europe, where the plant is used as a treatment for cancer.

5. Mistletoe is also a desert plant

European mistletoe grows in temperate regions all over the world. There are also several species in America that thrive in the deserts in the Southwest, where they live on palo verde, mesquite, juniper, pine and other trees.

Not all mistletoe has the festive holiday look most of us are used to. Some broadleaf mistletoes have green stems with oval-shaped leaves and small, sticky, whitish berries. Dwarf misteltoes are smaller, with scaly yellow or orange leaves. Some have no leaves at all and some look like a dense bundle of twigs stuck in the branches of another tree.

7. And goes by many different names

Are Massachusetts laboratory dogs being kept in poor conditions?