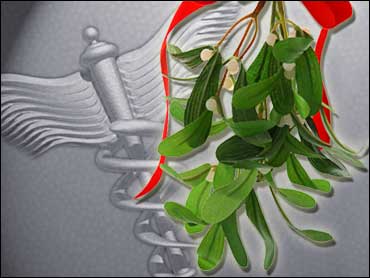 Taking mistletoe for cancer may be ineffective and possibly harmful, British doctors report.

"I recommend mistletoe as a Christmas decoration and for kissing under, but not as an anticancer drug," writes Edzard Ernst, M.D., Ph.D., FRCP, FRCPEd, in BMJ (formerly called British Medical Journal).

Ernst directs the complementary medicine department at the University of Exeter and Plymouth's medical school in England. He points out that in Europe, many cancer patients take mistletoe preparations and that Germany's insurance system covers mistletoe treatment.

In the U.S., the FDA hasn't approved any mistletoe cancer drugs.

Ten months later, she had a breast tumor surgically removed. At a follow-up appointment, she complained that she had a mass in her abdomen. Doctors removed the abdominal mass, which wasn't cancerous.

The mistletoe extract may have caused inflammation that led to the mass, which was located near the injection site, write University Hospital of Wales' Alison Finall and colleagues.

The Welsh group calls for "rigorous" trials to get conclusive data about mistletoe as a treatment for cancer.

Such a trial may already be under way: In the U.S., the National Center on Complementary and Alternative Medicine (NCCAM) is studying mistletoe's use with a chemotherapy drug in treating certain advanced cancers.

Those studies aren't focusing on the mistletoe used to deck the halls during the holidays. Instead, the NCCAM is studying European mistletoe, a different species that has been used for centuries as a remedy for a wide variety of health problems, according to the NCCAM's Web site.

Meanwhile, Finall and colleagues urge patients to tell their doctor about any use of complementary treatments.