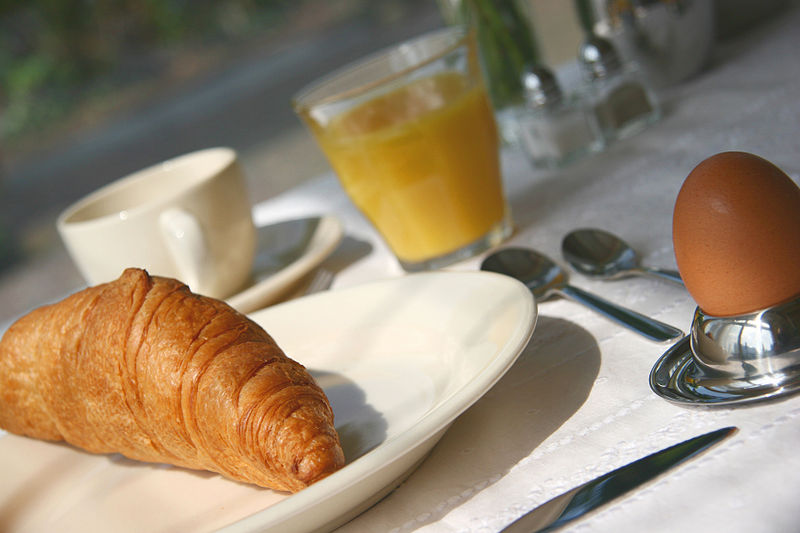 (MoneyWatch) Back away from the drive-through, and put down that toaster pastry. While we've all heard about how important breakfast is, the idea of waking up extra early to prepare and eat a decent morning meal isn't all that appealing if you start your day with a long commute.

So I asked seven chefs for their favorite on-the-go breakfast. Below is what these professional foodies eat when they want a quick and easy portable meal -- and you won't find a take-out bacon egg and cheese among them. The best part? You can easily bring most of them with you for a relaxed breakfast once you're at your desk.

Bagel with schmear, upgraded
Chef: Richard Blais
Restaurants: Flip Burger Boutiques in Atlanta and Birmingham, Ala., and The Spence in Atlanta
What he eats: Everything bagel, toasted, with a schmear of scallion cream cheese and 6 sliced cucumbers tossed in balsamic vinaigrette.

Wake up! 4 ways to become a morning person
Cheap and healthy lunch ideas: recommendations from Wolfgang Puck & 18 others
Monster commutes: should yours make the list?

Spanish mushroom sandwich
Chef: Luis Bollo
Restaurant: Salinas in New York City
What he eats: "Bikini a la plancha" (Marinate 2 portabella mushrooms in olive oil, thyme, and rosemary for one minute on each side, slice, and sear. Assemble with Spanish cheese onto multigrain bread and grill until cheese is melted. Garnish with sliced tomatoes and pickles.)

Berry-full parfait
Chef: Claire Thomas
Restaurant: Thomas hosts "Food for Thought," a TV show about Los Angeles food culture
What she eats: Mixed berry parfait with walnut coconut granola (Combine various berries and a pinch of orange zest in a bowl, let sit for 30 minutes, and layer with Greek yogurt, granola, and a drizzle of honey. Serve in a to-go cup.)

Fresher egg and cheese sandwich
Chef: Frederic Kieffer
Restaurants: Artisan in Southport, Conn., and l'escale in Greenwich, Conn.
What he eats: Scrambled egg sandwich made with fresh eggs from his co-op, chives from his garden, and Swiss cheese. Served on a toasted Portuguese roll or croissant.