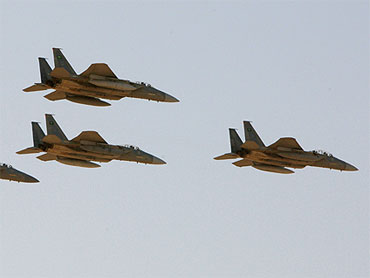 As American and Saudi officials spent months quietly hammering out a wish list for a mammoth sale of American warplanes and other weapons to the oil-rich kingdom, leaders in Iran were busy publicly displaying their advances in missiles, naval craft and air power.

In one memorable bit of political theater, Iranian President Mahmoud Ahmadinejad stood under a cascade of glitter in August to unveil a drone bomber — dubbed the "ambassador of death" — that he claimed would keep foes in the region "paralyzed" on their bases.

The response by Washington and its cornerstone Arab ally, Saudi Arabia, moved a step ahead Wednesday. The Obama administration notified Congress of plans to sell as many as 84 new F-15 fighter jets, helicopters and other gear with an estimated $60 billion price tag.

The proposed deal — one of the biggest single U.S. arms sales — is clearly aimed at countering Iran's rising military might and efforts to expand its influence.

But it ties together other significant narratives in the region, including an apparent retooling of Israeli policies to tacitly support a stronger, American-armed Saudi Arabia because of common worries about Iran.

It also reinforces the Gulf as the Pentagon's front-line military network against Iran even as the U.S. sandwiches the Islamic republic with troops and bases in Iraq and Afghanistan.

"In this way, Saudi Arabia does become some sort of buffer between Israel and Iran," said Pieter Wezeman, a senior researcher at the Stockholm International Peace Research Institute, a Swedish think tank that tracks arms sales.

Israel has made no diplomatic rumblings over the proposed Saudi deal — a marked contrast to almost automatic objections decades ago to Pentagon pacts with Arab nations. It's widely seen as an acknowledgment that Israel's worries over Iran and its nuclear program far outweigh any small shifts in the Israel-Arab balance of power.

Israel is moving toward a policy of "pick your fights," said Efraim Inbar, director of the Begin-Sadat Center for Strategic Studies at Bar Ilan University near Tel Aviv.

"After all," he added, "Saudi Arabia is not such a big threat to us."

And Israel does not come out of the current American arms bazaar empty handed. Earlier this month, it signed a deal to purchase 20 F-35 stealth fighters that could possibly reach Iran undetected by radar. Israel has an option for 75 more.

Besides the new fighters for Saudi Arabia, the U.S. plans to upgrade an additional 70 of the kingdom's existing F-15s. State Department and Pentagon officials told lawmakers the sales also will include 190 helicopters, including Apaches and Black Hawks, as well as an array of missiles, bombs, delivery systems and accessories such as night-vision goggles and radar warning systems.

Congress has 30 days to block the deal, which was first revealed in September but has been in negotiations for months. U.S. officials say they aren't expecting significant opposition.

Iran, meanwhile, has concentrated on its missile arsenal overseen by the powerful Revolutionary Guard. Its solid-fuel Sajjil missile has a reported range of more than 1,250 miles (2,000 kilometers) — within range of Israel and all main U.S. bases in the region.

Iran's navy has staged war games in the Gulf and announced major additions to its fleet, including three Iranian-built submarines designed to operate in the Gulf's shallow waters.

It marks the Gulf as a buyer's market for arms, led by the U.S. as the dominant Western military power from Kuwait to Oman. Throughout the Gulf, Washington counts on access to Arab allies' air bases, logistics hubs and the Bahrain headquarters of America's naval powerhouse in the region — the U.S. 5th Fleet.

A report last month by the U.S. General Accountability Office said Washington approved $22 billion worth of military equipment transfers to the six Gulf Arab states between fiscal 2005 and 2009 through a Pentagon-managed program.

More than half was earmarked for Saudi Arabia and the United Arab Emirates, including a $6.5 billion deal in 2009 for the UAE to buy the Patriot missile defense system.

The UAE agreement was the largest single arms approval during the five-year period — but is dwarfed by the proposed Saudi deal.

The researcher Wezeman said Iran is clearly the top perceived threat for the Gulf Arabs, but there are background concerns about Iraq's stability and the unrest in neighboring Yemen that includes Shiite Hawthi rebels and Islamic extremists linked to al Qaeda. The Saudi military was drawn into rare fighting in northern Yemen starting late last year, using airstrikes and artillery to battle a Hawthi rebellion that was spilling across the border.

Wezeman's group issued a report this month that estimates the eight nations ringing the Gulf — including rivals Iran and Saudi Arabia — accounted for 10 percent of all conventional weapons imports between 2005-2009.

The appetite was on display earlier this month when envoys from more than 50 U.S. defense and aerospace firms held talks in Abu Dhabi, where they were welcomed by the UAE's minister of foreign trade at an opulent hotel on the shores of the Gulf.

"This is a critical time for our companies abroad as the U.S. defense budget continues to face pressures at home," said a statement from Lawrence Farrell, head of the National Defense Industrial Association based outside Washington.

Jane Kinninmont, a Middle East and Africa specialist at the Economist Intelligence Unit, said concerns over Iran are the primary motivation for the Saudi arms expansion. But she wonders how much the untested Gulf forces rattle Iranian commanders who are almost all veterans of the 1980-88 war with Iraq.

"I would not be surprised if the Iranians are pretty cynical about the armies here," she said during an interview in Dubai. "To put it bluntly, they've fought a war."