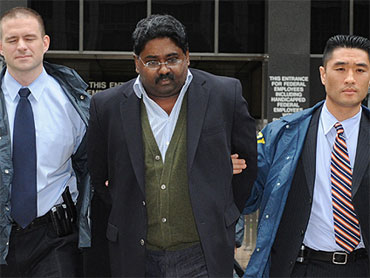 One of America's wealthiest men was among six hedge fund managers and corporate executives arrested Friday in a hedge fund insider trading case that prosecutors say reaped more than $20 million in illegal profits and should be a wake-up call for Wall Street.

Raj Rajaratnam, a partner in Galleon Management and a portfolio manager for Galleon Group, a hedge fund with up to $7 billion in assets under management, was accused of conspiring with others to trade based on insider information about several publicly traded companies, including Google Inc.

U.S. Attorney Preet Bharara, putting total profits in the scheme at $20.6 million, told a news conference it was the largest hedge fund case ever prosecuted and marked the first use of court-authorized wiretaps to capture conversations by suspects in an insider trading case.

He said the case should cause financial professionals considering insider trades in the future to wonder whether law enforcement is listening.

"Greed is not good," Bharara said. "This case should be a wake-up call for Wall Street."

Robert Khuzami, director of enforcement at the Securities and Exchange Commission, said the charges show Rajaratnam's "secret of success was not genius trading strategies."

Rajaratnam, 52, was ranked No. 559 by Forbes magazine this year among the world's wealthiest billionaires, with a $1.3 billion net worth.

Rajaratnam - born in Sri Lanka and a graduate of University of Pennsylvania's Wharton School of Business - has been described as a savvy manager of billions of dollars in technology and health-care hedge funds at Galleon, which he started in 1996. The firm is based in New York City with offices in California, China, Taiwan and India. He lives in New York.

According to a criminal complaint filed in U.S. District Court in Manhattan, Rajaratnam obtained insider information and then caused the Galleon Technology Funds to execute trades that earned a profit of more than $12.7 million between January 2006 and July 2007. Other schemes garnered millions more, authorities said.

A spokesman for Rajaratnam did not immediately return a phone call for comment Friday.

The timing of the arrests might be explained by a footnote in the complaint against Rajaratnam. In it, an FBI agent said he had learned that Rajaratnam had been warned to be careful and that Rajaratnam, in response, had said that a former employee of the Galleon Group was likely be wearing a "wire."

The agent said he learned from federal authorities that Rajaratnam had obtained a plane ticket to fly from Kennedy International Airport to London on Friday and to return to New York from Geneva, Switzerland next Thursday.

According to court papers, Chiesi worked for New Castle, the equity hedge fund group of Bear Stearns Asset Management Inc. that had assets worth about $1 billion under management. Kurland is a top executive at New Castle.

A criminal complaint filed in the case shows that an unidentified person involved in the insider trading scheme began cooperating and authorities obtained wiretaps of conversations between the defendants.

In one conversation about a pending deal that was described in a criminal complaint, Chiesi is quoted as saying: "I'm dead if this leaks. I really am. ... and my career is over. I'll be like Martha (expletive) Stewart."

Stewart, the homemaking maven, was convicted in 2004 of lying to the government about the sale of her shares in a friend's company whose stock plummeted after a negative public announcement. She served five months in prison and five months of home confinement.

Prosecutors charged those arrested Friday with conspiracy and securities fraud.

It was not immediately clear who was representing the defendants in court appearances scheduled for U.S. District Court in Manhattan later Friday.

A separate criminal complaint in the case said Chiesi and Moffat conspired to engage in insider trading in the securities of International Business Machines Corp.

According to a criminal complaint in the case, Chiesi and Rajaratnam were heard on a government wiretap of a Sept. 26, 2008 phone conversation discussing whether Chiesi's friend Moffat should move from IBM to a different technology company to aid the scheme.

"Put him in some company where we can trade well," Rajaratnam was quoted in the court papers as saying.

The complaint said Chiesi replied: "I know, I know. I'm thinking that too. Or just keep him at IBM, you know, because this guy is giving me more information. ... I'd like to keep him at IBM right now because that's a very powerful place for him. For us, too."

According to the court papers, Rajaratnam replied: "Only if he becomes CEO." And Chiesi was quoted as replying: "Well, not really. I mean, come on. ... you know, we nailed it."

The criminal complaints in the case also captured what authorities said were efforts by the defendants to hide their conversations from authorities.

In one conversation, Chiesi was heard telling Rajaratnam that she was "glad that we talk on a secure line, I appreciate that," to which Rajaratnam replied: "I never call you on my cell phone," the complaint said. It added that Chiesi said she was "nervous" about being investigated.