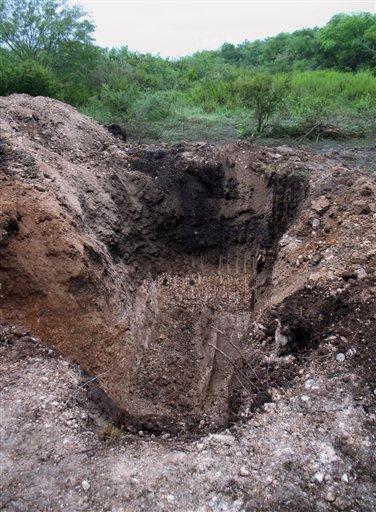 Investigators said Saturday they have found 51 corpses in two days of digging in a field near a trash dump outside the northern city of Monterrey, as excavations continued at one of the largest clandestine body dumping grounds in Mexico's bloody drug war.

The attorney general of Nuevo Leon state, where Monterrey is located, said the victims included 48 men and 3 women. There so many bodies that authorities were using refrigerated trucks to hold them, Alejandro Garza y Garza told local television.

Investigators are still struggling to identify the remains but suspect drug traffickers are involved.

"The majority of these bodies have tattoos of different types that could give us an indication about whether they belonged to one group or another and, among other things, determine whether they were linked to organized crime," Garza y Garza said.

He added that investigators were nearing the end of their search.

"We have practically covered all the area where we think there might be this sort of thing," Garza y Garza said. "In general terms, we are wrapping it up."

A state government spokesman said the bodies have been found both whole and in parts, with some buried in pits and others on or near the surface. The spokesman, who was not authorized to be quoted by name, said an anonymous phone tip led authorities to the site on Thursday.

Photographs showed charred spots on the ground - suggesting some bodies may have been partially burned.

Mexico's drug cartels have been known to use corrosive liquids, fire, quicklime and other methods to dispose of their victims or make identification of their bodies harder.

The largest mass grave found in recent years was discovered in May in the southern city of Taxco, where a total of 55 bodies were dumped in an abandoned mine shaft, apparently by a drug gang.

Nearly 25,000 people have been killed in drug violence in Mexico since the government launched an offensive against cartels in late 2006.

The government has said in the past that the overwhelming majority of the victims are gang members, in part because the cartels want to control domestic street-level drug sales and often kill rival dealers.

But the cartels have also slain law enforcement officials and kidnap victims.

Monterrey has been the scene of bloody turf battles between the Gulf cartel and its former ally, the Zetas gang.

The violence appears to have reached new levels in recent weeks, especially since traffickers claimed responsibility for a car bomb that killed a federal police officer and two others July 15 in Ciudad Juarez, across the border from El Paso, Texas.

On Friday, Mexico's Defense Department said in a statement that soldiers seized 57 pounds (26 kilograms) of a water gel explosive from nine gunmen killed in two separate clashes with soldiers in the border state of Chihuahua on Thursday.

That appears to be the same type of explosive U.S. investigators say was probably used in the Ciudad Juarez bombing.