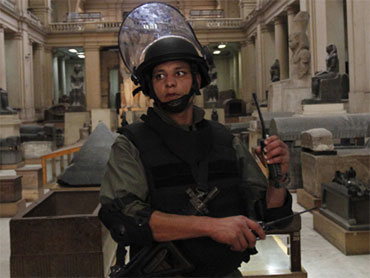 CAIRO - Soldiers detained about 50 men trying to break into the Egyptian National Museum in a fresh attempt to loot some of the country's archaeological treasures, the military said Monday.

Snipers were stationed on the roof of the building, and dozens of troops patrolled the grounds of the famed antiquities museum amid fears that the chaos sweeping Cairo could engulf the nation's heritage. Some of the most intense anti-government protests in the past week happened near the museum.

On Monday, half a dozen suspected thieves lay in a group on the floor of the entrance, their faces covered by a blanket. Guards said they were caught trying to enter.

A military general at the museum said soldiers arrested about 35 men trying to break into the building on Sunday, and another 15 on Monday. He spoke on condition of anonymity because he was not authorized to speak to the media.

Troops said they were given orders not to shoot, but to protect the building and its contents.

The majority of the museum was intact, but there were signs of an earlier break-in.

On the second floor, one case containing a gold trinket, two small rods and other small artifacts was broken, and another case was smashed on the first floor. The cases were next to the gated room containing the gold funerary mask of King Tutankhamun that draws millions of tourists a year.

At the museum's gift shop, broken glass, souvenirs and postcards littered the ground.

Zahi Hawass, Egypt's antiquities chief, walked through the darkened museum with a military guard and said the museum was heavily protected by the Egyptian army. Later Monday, he was appointed Minister of State Antiquities in the new government named by President Hosni Mubarak, who faces calls from protesters for his ouster.

"If the museum is safe, Egypt is safe," Hawass said.

A museum administrator found the head of a small clay statue on the stairs.

, ripping the heads off two mummies and damaging about 75 small artifacts before soldiers caught them. Hawass said the broken artifacts could be restored.

Museum director Tarek El Awady said the thieves appeared to be looking for gold, and didn't understand the value of other artifacts.

Before the army arrived early Saturday morning, young Egyptians, some armed with truncheons grabbed from police, created a human chain at the museum's front gate to ward off looters.

In the ancient city Luxor in southern Egypt, locals fended off a band of robbers who tried to break in and steal antiquities from the warehouse of the famed Karnak Temple on the east bank of the Nile.

The group clashed with the attackers who arrived at the temple carrying guns and knives in two cars around 3 a.m Monday, and arrested five of them, said neighborhood protection committee member Ezz el-Shafei.

The locals handed the five men to the army, which has posted a handful of soldiers at the vast temple's entrance.

Six boxes of small antiquities were looted from a storage facility in Egypt's Sinai Peninsula, but there were no break-ins at the other 24 antiquities museums across Egypt, according to Hawass.