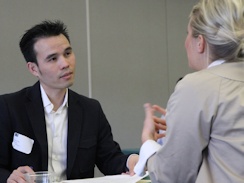 Most job interview advice centers around things you should say and do to help position you for success. You've probably heard most of that sort of thing already -- dress appropriately, turn off your cellphone, learn about the company in advance, and so on. But it's also handy to keep a good bead on things you should not say in an interview. If some of this advice sounds like common sense to you, congratulations! You're savvier than half the candidates who wander into conference rooms looking for jobs every day. Here are five no-no's from Oomph, a digital design blog:

Don't talk about how great the job would be for you. If the role is awesome for you, that's, well, awesome. But really, the interviewer's priority isn't making sure this role fits into your life plan -- he or she needs to make sure you're right for the role and the company. To be sure, a smart interviewer will want to be certain that you're interested in the role and not just trying to collect a paycheck. But don't make the conversation about you. Make it about how your skills and experience are right for the position.

Don't badmouth your last job or boss. This is one of the most important and yet often forgotten lessons of job hunting. It's important that you never depict yourself as fleeing your last job -- you're trying to step up to a better opportunity. Certainly, never highlight any problems you had with your last manager, even if you truly cannot work with that individual one more day. No interviewer will ever interpret such comments as anything but unprofessional and immature, and conclude you lack the interpersonal skills to be successful in the new role.

Don't mention religion, politics or any other personal philosophies. Not only is it none of the interviewer's business, but it has a tremendous potential to put you and the interviewer on opposite sides of a divisive issue. And since it's illegal for the interviewer to ask you about that stuff, you're putting him or her in a precarious and dangerous position to discuss it at all. They won't thank you for that.

Don't talk about the rest of your day. Oomph, for example, calls out that you shouldn't mention your spouse or parent is waiting for you in the car. The bottom line is that this interview is your one and only priority this day, period. You should be 100 percent focused on that, and not ask how soon you'll be done, mention your ride is waiting or that you have a dinner date.

Don't miss an opportunity to ask questions. You'll always get an opportunity to ask questions, and you should definitely take advantage. Not asking questions means you don't have any curiosity about the company, the role or your future -- in other words, you're there to try to collect a paycheck. That makes you relatively less competitive than someone else who appears ready to eagerly climb the ladder from entry level sales manager to CEO, even if you seem otherwise better qualified.

5 body language moves that will ruin an interview