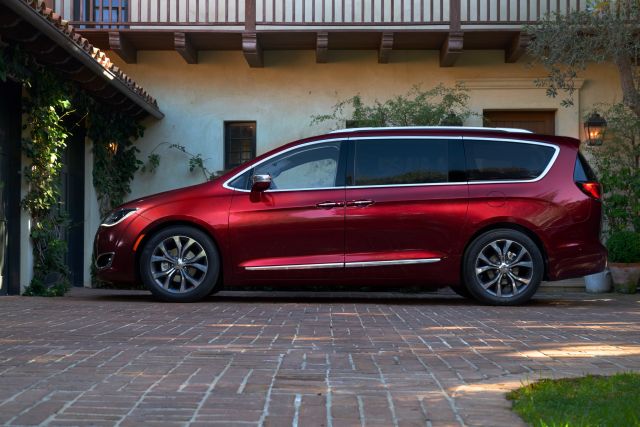 The minivan is the Rodney Dangerfield of vehicles. But even if you get no respect from those who see their cars as glamorous extensions of themselves, practicality dictates that a minivan might be exactly the right vehicle for you.

Chrysler is consolidating its minivan bets with the redesigned, renamed Chrysler Pacifica just introduced at the Detroit auto show. It replaces what were two separate minivans -- the Chrysler Town & Country and the Dodge Grand Caravan.

Chrysler, which invented the minivan three decades ago, designed the new model with a sculpted, sloping roof line and flashier tail lights than usually seen on a minivan. For the green-minded shopper, the new Pacifica will offer a plug-in hybrid version whose mileage is rated at the equivalent of 80 MPG.

Minivans have never been cool, and no redesign will make them so, said Matt DeLorenzo, managing editor of Kelley Blue Book. The cooler alternative in today's market is the small SUV or crossover like a Honda CR-V or Ford Escape.

But new families that need the functionality of a minivan will keep the market at its current sales level of about 500,000 annually, said DeLorenzo. Fiat Chrysler's (FCAU) main minivan competitors are Honda's (HMC) Odyssey and the Toyota's (TM) Sienna. General Motors (GM) and Ford (F) abandoned the segment some years back.

Nonetheless, if you care more about comfort, convenience and space than about your image with the neighbors, consider a minivan. You may be a buyer if:

You have children. The seating for up to eight, the ample cargo space and the easy access through sliding side doors make minivans ideal for families. That sliding door also eliminates the possibility that an eager child will open a hinged door and slam it into an adjacent car in a parking lot. "As long as there are children, there will be sliding doors," said Rebecca Lindland, another analyst at Kelley. Plus, higher-model minivans often have drop-down screens for videos that will help keep the offspring from continually asking: "Are we there yet?"

You have grandchildren. Whether your grandkids are nearby or in another state, when you do see them you can fit them, their toys and gear, and maybe their parents also, in a minivan. Kelley Blue Book's DeLorenzo said seniors additionally like the road-commanding high seating of minivans and the easy access of the sliding doors. And like kids, senior friends can also get into the vehicle more easily with those doors.

You're a coach or coach's helper in youth sports. Whether the game is Little League baseball, soccer or lacrosse, those road trips will require plenty of seating, plus room for bats, balls, gloves and shoes. With two minivans, you could probably handle the whole team.

You want bargain hauling capacity. As with Chrysler's past minivans, the Pacific can handle a eight-foot by four-foot sheet of plywood with all rear seats folded down. The company has not yet released prices for the 2017 Pacifica, but the 2016 Dodge Grand Caravan starts at $22,095 for the base model. At that price you get 144 cubic feet of hauling space with the rear seats folded down. By comparison, a top-selling large SUV, the Chevrolet Suburban, has a maximum of just 122 cubic feet. And its starting price is $49,700.

You want to go unnoticed. "Even though modern minivans have a modicum of style, no none pays any attention to them, "said DeLorenzo. He cited the movie "Get Shorty," in which the Danny DeVito character thought the Oldsmobile Silhouette minivan of that time was the perfect gangster car because of its anonymity.