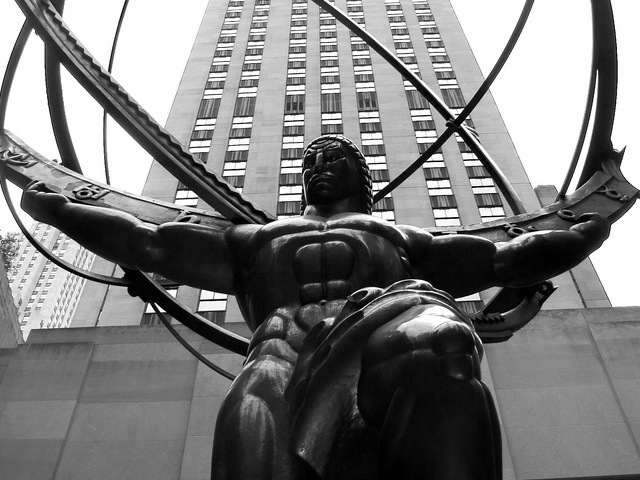 (MoneyWatch) COMMENTARY A new book by David Rothkopf titled "Power, Inc.: The Epic Rivalry between Big Business and Government, and the Reckoning that Lies Ahead" explores the power struggle between global corporations and government attempts to regulate them.

Rothkopf asks a number of intriguing questions like which is more powerful, which has more political clout and which has a greater impact on world events. He concludes that global corporations are in charge these days and that the world needs more of a balance.

On the surface, that sounds sort of reasonable. While I agree that balance is a good thing, I don't agree with the author's ideas on how to achieve it. Moreover, I don't agree that global corporations are running the show, so to speak.

In a CBS interview, Rothkopf talks about how U.S. banks brought about the financial meltdown by essentially pulling the government's strings. First they told the government to get out of their hair, then, when everything fell apart, they said bail us out. And now, aside from Dodd-Frank, things are pretty much back to the way they were.

Rothkopf essentially thinks that global corporations have become too big, that they wield too much power and that stronger global regulation will solve the problem. He says we need more in the way of real global regulatory mechanisms, organizations like the IMF, World Bank and the United Nations, except with more teeth.

I think that argument is so over-the-top wrong it makes my head spin. So, if for no better reason than to keep me sane, let me try to bring this discussion back to planet Earth and boil my objections down to five myths about the alleged power struggle between global corporations and government regulation.

First of all, the idea that the banks caused the sub-prime mortgage crisis and the subsequent financial meltdown is ludicrous. Sure, they were complicit, but so were the heads of pseudo-government agencies Fannie Mae and Freddie Mac, federal regulators, the Fed and several congressional leaders, as I explained in Who's responsible for the financial crisis?

The second myth is that government regulation is the cure for bad capitalism, crony capitalism, fraud and greed. The problem with that argument is that government leaders and regulators are subject to the same issues as corporate executives. That's because they're people, and the more power you give them, the more greed and fraud you'll get.

It bears mentioning that, when Lord Acton famously wrote, "Power tends to corrupt, and absolute power corrupts absolutely," he was referring to political and religious leaders -- kings and popes -- not business leaders. That said, they're all flesh and blood humans, so they're all the same in that respect.

The way to guard against corruption and fraud is to have a logical system of checks and balances. That, I agree with. But that balance doesn't necessarily mean more government regulation. That just concentrates more power in one place and, in turn, creates more opportunity and incentive for corruption, manipulation and cronyism.

For example, if you had a simple tax code of x percent, for simplicity sake, there would be no lobbying about tax codes and no loopholes for big companies or the wealthy. The same is true of any laws and regulations. When government overreaches and over-regulates, that's when you end up with corruption.

Which brings us to the third myth, that more regulation is the enemy of big business. Actually, the opposite is true. The more regulation, the more opportunity for corruption, the bigger the advantage for bigger companies to lobby and manipulate the system, the harder it is for small businesses to survive. There are loads of examples.

In most American cities, you can't own a taxi unless you're a big company with $1 million to pay for the huge medallion "tax" set by regulators. Dodd-Frank is likewise having a similar affect on regional banks, just as Sarbanes-Oxley made it more expensive for small companies to become publicly traded. All those regulations favor big business.

The fourth myth is the premise that, over time, corporations have become bigger and more powerful. Yes, Apple (AAPL) recently became the sixth company in history to reach a $500 billion valuation, but there's a reason why the other five have since fallen below that mark.

There are a number of limiting factors for corporate growth. Bigger is only better to a point. And so far, there always seems to be a point. The reason is twofold: competition and things change. Those are the two dominant balancing factors for businesses.

In every case, at some point, growth in a mature business is not as profitable as it once was. In the interest of long-term shareholder value, it's better to refresh product lines, adopt new technology, start new lines of business and abandon old ones.

Somebody should really do an inflation-adjusted analysis of the biggest companies of all time. Somehow, I doubt that we have substantially more or bigger big companies and fewer small companies today than we did 50 years ago.

That's sort of the interesting thing about the marriage of democracy and capitalism. They're inherently balanced, as long as neither side over-reaches. Some regulation is good. Some government is good. After all, we're a nation of laws, right? And we have three branches of government to maintain that balance.

In any case, it's up to we the people to possess the leadership and the collective wisdom to find the right balance and, when it gets out of whack, as it does from time to time, to bring it back. Hopefully, we learn from our mistakes and do better next time.

But there is no Utopian, big brother, regulatory body or bodies, on any scale, that can make everything right. Because, and here's the key point: the bigger and more powerful the regulatory body, the more corruptible it is. And that corruption is most effectively exploited by, you guessed it, big business. Ironic, isn't it?