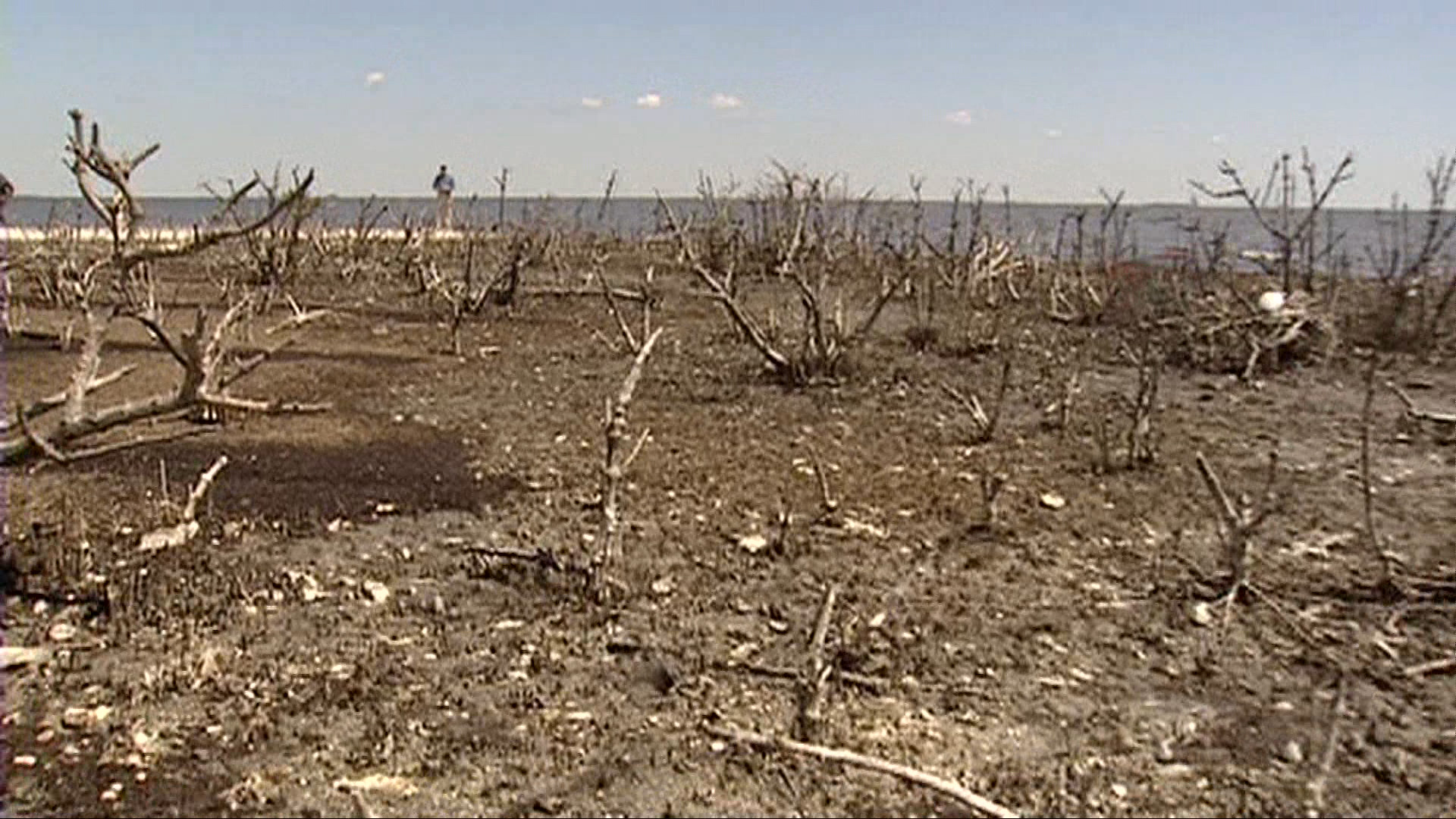 This story was updated at 4:00pm on Friday to include a statement from BP.

On April 20, 2010, BP's Deepwater Horizon oil rig dumped more than 200 million gallons of thick crude oil into the Gulf of Mexico. Four years later, environmental impacts of the worst offshore spill in U.S. history persist along the Gulf Coast.
Fishermen in coastal Louisiana say that massive clean-up efforts have helped, but not nearly enough. CBS News toured the marsh areas with the National Wildlife Federation (NWF) and other environmental groups.
The boat ride revealed clumps of oil churned up in waves and vegetation eroding along the shore. Where pelicans and other migratory birds once nested, there are now expansive areas of barren land and dead mangroves.
"Mangroves have these little breathing structures on the roots and they were coated in oil, so the plants themselves died," explains the NWF's David Muth. "And so now there's no where for the pelicans to nest here."
These findings serve as supporting evidence for a recent NWF study. It found that 14 species, including blue fin tuna, bottlenose dolphins, sperm whales, white pelicans, red snapper, Eastern oysters and sea turtles, are suffering from the fallout of the spill.

chain may indicated problems in the ecosystem as a whole," the report said.

More than 900 bottlenose dolphins have been found dead -- a term scientists use when a dolphin is nearly dead -- in the oil spill area in the last four years.

"In 2013, dolphins were still stranding at more than three times average annual rates before the spill," NWF reported, citing strong evidence that the stranding is related to oil exposure.

On Friday, BP press officer Ryan Jason issued a statement to CBS News.
"These groups have chosen to focus on a few miles of marsh area rather than the more than 150 miles of Louisiana marshes that show signs of recovery, or the nearly 2,700 miles that either were not oiled or were lightly oiled in 2010," he said.
"The fact is the U.S. Coast Guard has declared 'removal actions deemed complete' for all but six of the 4,379 shoreline miles that were originally in the area of response. Under the Coast Guard's direction, cleanup strategies were determined based on the net environmental benefit they provided," it continued.
The statement also pointed to scientific studies that determined that the best approach is to let marshes recover on their own. To judge recovery after just four years is too soon.
If the fallout of previous catastrophic oil spills is any indication, it will be decades before the species, and the shorelines and waters that the inhabit, will fully recover. A quarter century has passed since the Exxon Valdez spill in Prince William Sound, yet clams, mussels and killer whales are still classified as "recovering," according to NWF, and the Pacific herring population is "showing few signs of recovery."
The NWF report outlines ways to attempt to speed up the area's recovery. According to the Oil Pollution Act, companies responsible for spills are responsible for covering the full costs of clean up. BP announced in 2011 that it will pay $1 billion down payment on the clean up costs. The NWF says the final costs could tally more than $14 billion.
No matter how much money is exchanged and what efforts are done, there remains no guarantee that the Gulf Coast regions will fully recover to pre-spill conditions.
View CBS News In
CBS News App Open
Chrome Safari Continue
Be the first to know
Get browser notifications for breaking news, live events, and exclusive reporting.