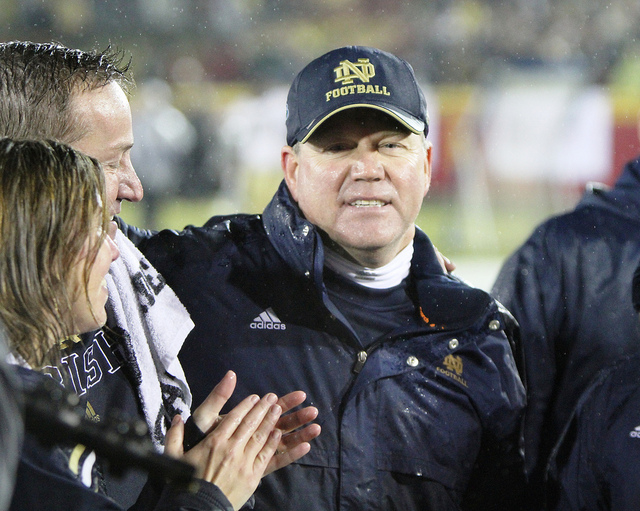 As the television camera caught a close up of a clearly annoyed Brian Kelly, ESPN analyst Kirk Herbstreit joked that the Notre Dame football coach's demeanor sometimes made even him afraid.

Notre Dame officials have reprimanded Kelly for his sideline temper tantrums. And to his credit Kelly has toned down his act, but he can still get himself worked up when things go wrong for his team.

College football players are accustomed to being yelled at publicly, and what may seem to outsiders as cruel and unusual is accepted as normal in sports. Yet constant histrionics become tiresome, and when players don't fear a coach's wrath, counterproductive things happen: one, they stop listening; and two, they lose respect for the coach. Neither are good outcomes.

Managers, too, are under the same spotlight. So for that reason it behooves a manager to keep his or her cool, especially when the going gets tough. Work is hard enough without having to put up with an angry boss.

So what can a boss do when he or she feels as if he is about to fly off the handle? Here are four key strategies:

Walk away from the situation. Do not allow your team to see you lose your cool. Go off by yourself and vent, even it means screaming out the window. Sit down and breathe deeply.

Think about consequences. As you calm down, plan your next move. You may be justified in your anger; your team may have let you and themselves down. Think through how you will get them re-focused on the job at hand. Consider what you need to do to remedy the situation.

Have a conversation with the team. Call everyone together. Make your displeasure known. Allow the team to express their feelings. Likely there is enough blame for all to share. Focus on next steps and move forward immediately.

Bosses, believe it or not, are human and like the rest of us may lose their cool occasionally. When that happens, it is important to act promptly. Do not wait a few days to apologize. Do it immediately as soon as the heat of the moment has died down.

Back up the apology with an action step. Make amends to the person or the team you've yelled at. How? Promise that you will do better next time and hold yourself accountable for the consequences. Offer to do something special for the team. That could mean buy everyone lunch or pitch in to help them get a tough job done on time.

Managers are not hired to be friends with they people they manage but they are expected to treat others how they would like to be treated themselves. That is to say, with civility and respect.