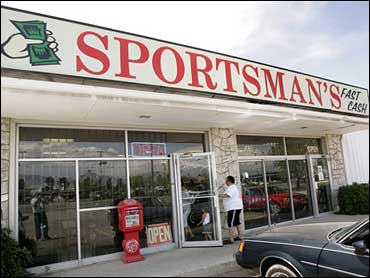 A grand jury indicted four people, including a U.S. Army soldier, in connection with the firearms a teenager used to kill five people at a shopping mall, documents unsealed Thursday show.

Sulejman Talovic, an 18-year-old Bosnian immigrant, had carried a shotgun and a handgun as he stalked through the mall, firing apparently at random. He died in a shootout with police during the Feb. 12 attack at Trolley Square.

The indictments charge three people in the illegal sale of a .38-caliber Smith & Wesson handgun to a juvenile, and a gun dealer in the sale of a .12-gauge shotgun with a pistol grip. The soldier, Matthew Hautala, was described as a witness to the handgun deal and was indicted for denying knowledge of the sale to authorities.

None of the four are accused of knowing Talovic's plans.

Mackenzie Glade Hunter, 19, and Brenden Taylor Brown, 20, both from West Jordan, Utah, are accused of arranging the sale of the handgun last summer in Rock Springs, Wyo. Westley Wayne Hill, a licensed Utah firearms dealer, is charged with selling the shotgun with a pistol grip.

The pistol grip, which allows a shotgun to be fired from waist level, is a feature that can be sold only to a person 21 or older, said Lori Dyer, an agent with the U.S. Bureau of Alcohol, Tobacco, Firearms and Explosives.

Brown was being held in custody pending a detention hearing Friday. Hunter and Hill were released after brief court appearances. It was not immediately known if any had attorneys. Hautala had not yet appeared in court.