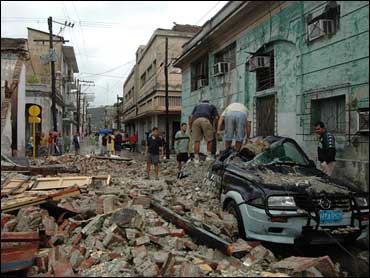 Hurricane Ike roared down Cuba's spine Monday and toward the island's densely populated capital of fragile historic buildings after ravaging homes and forcing 1.2 million people to evacuate. U.S. residents from Florida to Texas braced for Ike's next wallop.

Ike, which raked the Bahamas and worsened floods in Haiti that have killed at least 331 people, made landfall on eastern Cuba as a terrifying Category 3 hurricane, then weakened Monday as it ran along the length of the Caribbean's largest island.

Cuban state television reported Monday that Ike had killed four people - the first storm deaths on the island in the 2008 Atlantic hurricane season. Two men were killed in central Cuba while removing an antenna from a roof. On the island's east, a woman died when her house collapsed on her and a man was killed by a falling tree.

It was a Category 1 storm Monday afternoon, but forecasters expected it to strengthen again before hitting Louisiana or Texas this weekend.

CBS Early Show weather anchor Dave Price reported Ike was expected to make landfall on the Texas or Louisiana coasts on late Friday or early Saturday, depending on how quickly it beat its path across the Gulf.

Hurricane force winds were blowing within a 35-mile radius from the storm's center, and tropical storm force gusts could be felt as far away as 175 miles, added Price.

"This critter was angry, really angry," Delia Oliveras, 64, said in the central city of Camaguey. Winds tore the roof from the living room where her family was huddled, and they fled to a covered patio. "We have seen hurricanes, but never as big as this."

Cuba, which has carried out well-executed evacuations over the years, ordered 1.2 million people to seek safety with friends and relatives or at government shelters, state television reported. In Havana, where the hurricane was expected to unleash heavy winds and rain by Tuesday morning, evacuations began in earnest late Monday afternoon.

"I feel safe here, above all for my granddaughters who are the most important thing in my life," said Marta Molas, who evacuated with seven relatives from a marginal neighborhood. "They take good care of us, we have television and food. Right now we are watching TV to see where Ike is and when the electricity goes out we have a radio."

The government closed schools and government offices in the capital as people reinforced windows with wood, removed plants from balconies and formed long lines at bakeries. Along the seaside Malecon promenade where youths hang out at night, businesses were being shut down.

Nancy Nazal, who lives on the second floor of a high-rise apartment building overlooking the ocean, said authorities had told her to be prepared to evacuate - and she was: "The truth is, we are scared," she said.

Evacuations are not mandatory in Cuba except for pregnant women and small children. But in an authoritarian state, few people would think to ignore the government's advice - and state news media make an example of the few who pay the ultimate price when they fail to evacuate.

Gustav tore across western Cuba as a monstrous Category 4 hurricane on Aug. 30, damaging 100,000 homes and causing billions of dollars in damage. But no deaths were reported as a result of mandatory evacuations of at least 250,000 people.

Waves created by Ike crashed into five-story apartment buildings, hurling heavy spray over their rooftops, and winds that uprooted trees.

More than 1,000 homes were damaged, including 300 destroyed, when Ike first made landfall in Cuba in the easternmost coastal city of Baracoa, said Luis Torres, president of the Civil Defense Council in Guantanamo province.

Falling utility poles crushed cars parked along narrow streets in Camaguey and the roaring wind transformed buildings of stone and brick into piles of rubble. Colonial columns were toppled and the ornate sculptures on the roofs of centuries-old buildings were smashed in the city, a UNESCO world heritage site.

"I have never seen anything like it in my life. So much force is terrifying," said Olga Alvarez, 70, huddling in her Camaguey living room with her husband and teenage grandson. "We barely slept last night. It was just `boom, boom, boom."'

Much of eastern Cuba was without electricity and phone service was spotty. The road between Santiago and Guantanamo was cut when a reservoir overflowed.

By Monday afternoon, Ike had moved just offshore, giving it fuel to maintain its strength over Cuba, said Felix Garcia, a meteorologist at the National Hurricane Center in Miami.

"It's over warm waters," Garcia said. "It can definitely maintain its strength right now, and when it's out of Cuba it has the potential to become a lot stronger."

Ike had maximum sustained winds of 100 mph on Monday afternoon, and was centered 80 miles west of Camaguey. Cuban state television reported widespread rainfall of more than 4 inches, with more than 8 inches in some places.

State television said officials had taken measures to protect thousands of tourists at vulnerable seaside hotels, including about 10,000 foreigners at the Varadero resort, east of Havana.

A few street signs were toppled at the U.S. naval base at Guantanamo Bay in southeast Cuba and power went out temporarily in some residential areas, Navy Petty Officer 1st Class Robert Lamb said. But no injuries were reported, and the military said cells containing detainees - about 255 men suspected of links to the Taliban and al Qaeda - are hurricane-proof.