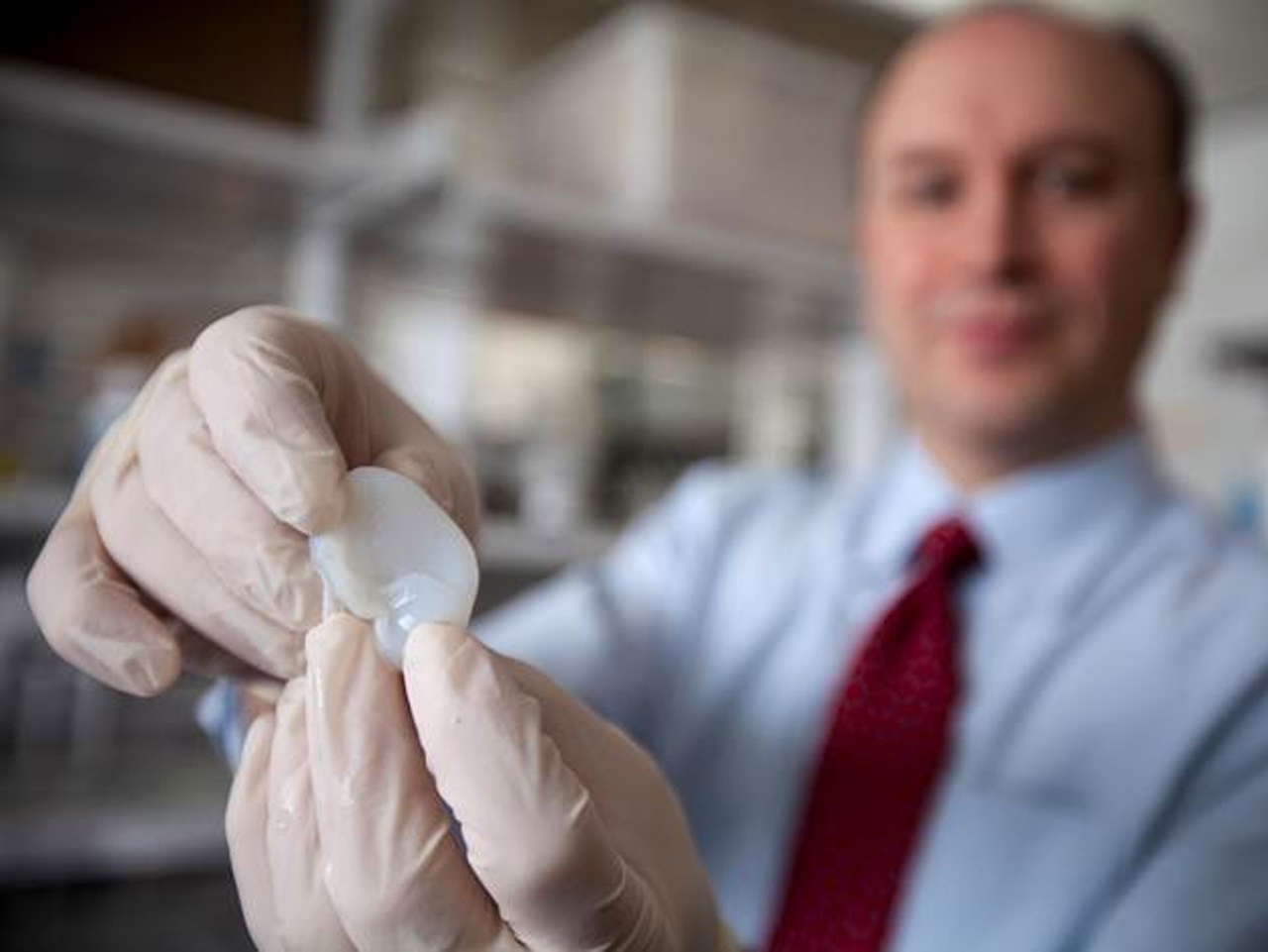 Cornell University scientists have grown human ears from cow cells with the help of a 3D printer.

The work reported Wednesday is a first step toward one day growing customized new ears for children born with malformed ones, or people who lose one to accident or disease.

It's part of the hot field of tissue regeneration, trying to regrow all kinds of body parts. Scientists hope using 3D printing technology might offer a speedier method with more lifelike results.

If it pans out, "this enables us to rapidly customize implants for whoever needs them," said Cornell biomedical engineer Lawrence Bonassar, who co-authored the research published online in the journal PLoS One.

This first-step work crafted a human-shaped ear that grew with cartilage from a cow, easier to obtain than human cartilage, especially the uniquely flexible kind that makes up ears. Study co-author Dr. Jason Spector of Weill Cornell Medical Center is working on the next step -- how to cultivate enough of a child's remaining ear cartilage in the lab to grow an entirely new ear that could be implanted in the right spot.

Wednesday's report is "a nice advancement," said Dr. Anthony Atala, director of the Institute for Regenerative Medicine at Wake Forest Baptist Medical Center, who wasn't involved in the new research.

Three-dimensional printers, which gradually layer materials to form shapes, are widely used in manufacturing. For medicine, Atala said the ear work is part of broader research that shows "the technology now is at the point where we can in fact print these 3-dimensional structures and they do become functional over time."

Today, people who need a new ear often turn to prosthetics that require a rod to fasten to the head. Prosthetics are sometimes made out of artificial materials with a Styrofoam-texture, according to the Smithsonian blog. For children, doctors sometimes fashion a new ear from the stiffer cartilage surrounding ribs, but it's a big operation. Spector said the end result seldom looks completely natural. Hence the quest to use a patient's own cells to grow a replacement ear.

The Cornell team started with a 3D camera that scanned a child subject's existing ear. The 3D camera beams the ear's geometry into a computer, without the mess of a traditional mold or the radiation if CT scans were used to measure ear anatomy.

In the future, though, they hope to be able to reverse the 3D scan so it can create a mirror image of a healthy ear so they can replace a non-existing ear.

From that image, the 3D printer produced a soft mold of the ear. Bonassar injected it with a special collagen Jell-O-like gel that's full of cow cells that produce cartilage - forming a scaffolding. The entire process took less than a day.

"It takes half a day to design the mold, a day or so to print it, 30 minutes to inject the gel, and we can remove the ear 15 minutes later. We trim the ear and then let it culture for several days in nourishing cell culture media before it is implanted," Bonassar said in a press release.

Over the next few weeks, cartilage grew to replace the collagen. The ears were then implanted underneath the skin on the backs of lab rats. Three months later, the grown ears were made out of cartilage cells and still kept its original shape.

Now Bonassar's team can do the process even faster by using the living cells in that collagen gel as the printer's "ink." The 3D technology directly layers the gel into just the right ear shape for cartilage to cover, without having to make a mold first.

The next step is to use a patient's own cells in the 3D printing process. If this can be done, researchers say that they hope to be able to implant and create an ear for a child when they are five to six-years-old and their ears have reached 80 percent of their adult size.

"Using human cells, specifically those from the same patient, would reduce any possibility of rejection," Spector said in a press release.

Spector, a reconstructive surgeon, is focusing on children born without a fully developed external ear, a condition called microtia. They have some ear cartilage-producing cells in that tissue, just not enough. So he's experimenting with ways to boost those cells in the lab, "so we can grow enough of them from that patient to make an ear," he explained.

That hurdle aside, cartilage may be the tissue most amenable to growing with the help of 3D printing technology, he said. That's because cartilage doesn't need blood vessels growing inside it to survive.