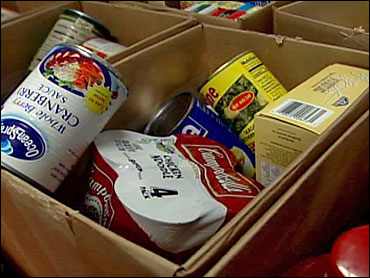 An estimated 3.5 million children under the age of 5 are at risk of hunger in the United States, according to a look at government numbers by an anti-hunger group.

That's more than 17 percent of children who could suffer cognitive and developmental damage if they are not properly fed.

The not-for-profit advocacy group Feeding America based its findings on 2005-2007 data from the U.S. Census Bureau and the Agriculture Department. The study, released Thursday, is the first to look at these numbers for children under the age of 5, according to the group.

The study also shows that in 11 states, more than 20 percent of children under 5 are at risk of going hungry. Louisiana has the highest rate, with just under a quarter of children at risk, followed by North Carolina, Ohio, Kentucky, Texas, New Mexico, Kansas, South Carolina, Tennessee, Idaho and Arkansas.

According to the Agriculture Department, 11 percent of households lacked enough food for an active, healthy life, before the economy worsened late last year.

The study looks at a range of children who are at risk, from those who have low quality or variety of food to those who regularly experience hunger.

A lack of nutritious food, especially in the earliest formative years, can have a lasting impact on physical and behavioral health, along with development and academic achievement.

"These children without the availability of nutrition don't have the chance to spring back," said Vicki Escarra, president and chief executive of Feeding America.

Dr. John Cook, the lead researcher on the report and an associate professor of pediatrics at Boston Medical Center, says hunger varies by state based on two main factors - the level of employment and poverty, and the extent of food and income assistance programs in the region.

Anne Goodman, executive director of the Cleveland Foodbank in Ohio, says there are several successful programs to feed school-age children, but beyond government nutrition programs infants and toddlers can be harder to help.

"We have all these places to touch older children, but with the younger children what we are doing is serving their families," she said.

The study was paid for by The ConAgra Foods Foundation, a charity arm of the large food company.

The U.S. study coincides with a U.N. statement claiming, the number of hungry people in the world could soon hit a record 1 billion, despite a recent drop in food prices.

The recent financial crisis, though it has helped bring global food prices down, also has led to falling trade and lower development aid, according to the Food and Agriculture Organization's general director, Jacques Diouf.

As a result of the crisis, an additional 104 million people were likely to go hungry this year - meaning they receive fewer than 1,800 calories a day, Diouf told reporters Wednesday after a two-day meeting in Paris between the FAO and the Organization for Economic Cooperation and Development.